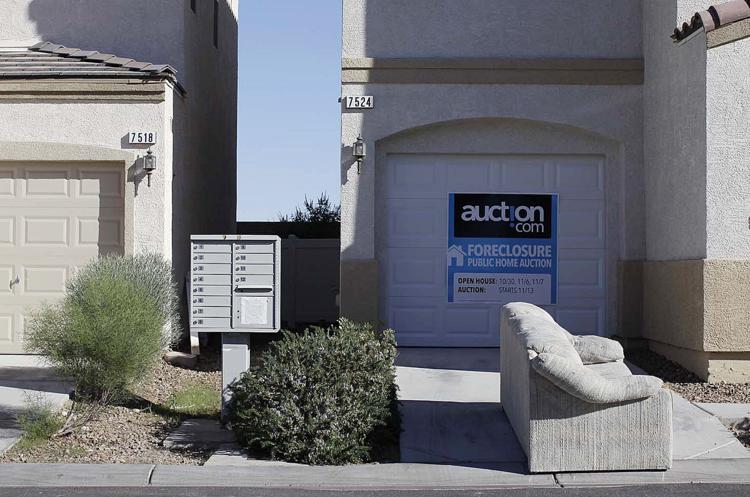 In this photo taken Wednesday, Nov. 17, 2010 in Las Vegas, a couch left behind at a foreclosed home sits at the end of the driveway.
AP Photo/Julie Jacobson

(Robert Davis) – The Las Vegas metropolitan area had one of the highest foreclosure rates in the country during the third quarter of 2021, according to new data from real estate analytics firm ATTOM Data Solutions.

Among the 220 metro areas ATTOM analyzed, one in every 1,167 Las Vegas homes were in foreclosure in the third quarter, the fifth-highest total in the country. Other metro areas included in the top-5 are Atlantic City, N.J., Peoria, Ill., Bakersfield, Calif., and Cleveland, Ohio.

Last month alone, there were nearly 20,000 properties with foreclosure filings across the country, the report says. That represents a 24% increase from August and a 102% increase from September 2020.

Throughout the entire quarter, there were 45,517 foreclosure filings – which include default notices, scheduled auctions or bank repossessions – that were filed against homes in the U.S. This total represents a 34% increase from the second quarter of 2021, and a 68% increase from this time last year.

Despite the alarming numbers, some analysts say the activity is still below historic norms.

“Even with similar increases in foreclosures over the next few months, we’ll end the year significantly below what we’d see in a normal housing market,” he said in a statement.

One reason for the uptick in foreclosure filings is that the Federal Housing Administration allowed the foreclosure moratorium to sunset on September 30. The order prevented agencies from filing foreclosures against federally insured, single-family properties.

Nevada is also in the process of phasing out its own eviction and foreclosure moratorium. Meanwhile, lawmakers passed Assembly Bill 486 to help distribute more than $360 million in federal relief funds to local landlords and renters.

Sharga said these actions demonstrate the efforts that the mortgage industry and government leaders went through to avoid “unnecessary foreclosures.”

However, with a growing number of borrowers set to exit forbearance, Sharga caveated that “it’s possible that we might see a higher percentage of those borrowers default on their loans.”