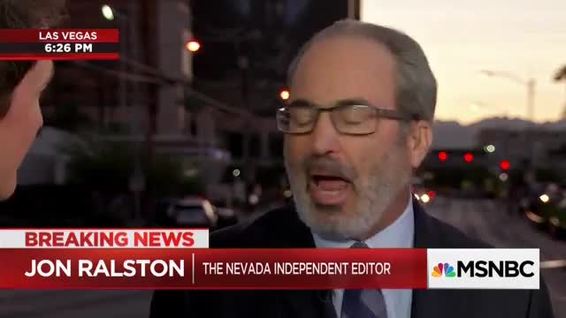 Liberal Nevada blogger Jon Ralston went on another of his patented hissy fits yesterday and the foot-stomping keyboard meltdown was truly epic.  As the late, great comedian Robin Williams once put it, “Joan of Arc did less whining on the stake.”

Blogger Jon used to be a columnist.  But he’s no longer published by any major print newspapers in Nevada.  He also used to have a cringe-worthy community affairs television show.  But he successfully got himself booted from every network – including PBS!

How bad is THAT?

So last year he applied for a job as editor of a newsblog my organization originally founded back in 2009: The Nevada News Bureau.  He changed the name to the Nevada Independent, slapped some liberal paint on the office wall, and proceeded create Nevada’s own, home-grown version of “fake news.”

Blogger Jon’s legendary ego is big enough to cause a lunar eclipse, and he’s downright DESPERATE to be taken seriously in his new job with his new newsblog – hereinafter referred to as the “Ralston Rag.”  He believes himself to be on par with the likes of Woodward and Bernstein, but his oafish antics and dim wit more often resemble Pee-Wee Herman.

But let’s get to the meat with these potatoes…

Noting that there will be no “hard and fast rules” (big surprise), Blogger Jon pronounced from upon high that “there is no public benefit in covering candidates who have clearly demonstrated they are unfit for public office or who have zero chance of getting elected no matter what coverage they get.”

In short, Blogger Jon will subjectively decide who is a credible candidate worthy of attention and who isn’t.

Again, desperate to be taken seriously, Ralston first announced that he was “thrilled” – though we’re not sure if a tingle ran up his leg like Chris Matthews – that the Library of Congress had selected the Ralston Rag “for inclusion in the historic collection of Internet materials related to the General News on the Internet Web Archive.”

Not exactly a Pulitzer.  Or even a Rotten Tomato.  But when you’re desperate for any shred of credibility you take what you can get, right?

It seems a number of candidates and elected officials don’t consider the Ralston Rag to be a credible news organization and have been refusing to give his newsblog the time of day.  Indeed, Senate Minority Leader Michael Roberson is quoted as saying he only “provides commentary to reputable news outlets” and “does not consider The Nevada Independent as such.”

In other words, Roberson is treating Ralston the exact same way Ralston, just two days earlier, announced he’ll be treating certain candidates based on credibility.  Shoe on the other foot.  Sauce for the goose.

Ralston went on to spew forth his venom at Nevada Attorney General Adam Laxalt and U.S. Sen. Dean Heller for also blowing off interview requests from the Ralston Rag, whining that such blacklisting “is not just puerile (Jon loves to use fancy words to appear smarter than everyone else); it’s unethical and unconscionable.”

He added that he was “disturbed” (absolutely true in another sense of the word) that Laxalt and Heller were “blocking requests for public information, potentially violating records laws by instructing taxpayer-financed staffers to ignore our reporters.”

No one has blocked ANY request for public information in violation of state law.  There are specific processes and procedures for making a public records request.  And Blogger Jon failed to cite even ONE example where the Ralston Rag has made such a request that’s been blocked.

No.  To back up his false allegation, Ralston cites only examples of where these elected officials have simply opted not to respond to requests from his newsblog for comments.

The nub of this issue, of course, is Ralston’s legendary hatred for all things conservative.  His bias is well documented and undeniable.  For years Ralston has served as a propaganda arm for the left wing; attacking and ridiculing conservatives and Republicans with reckless abandon, dripping with disdain.

Even when one of his reporters – true, talented professionals – tell a story straight, Ralston regularly hops up on his Twitter horse and uses those stories to take cheap shots at conservatives and Republicans he personally can’t stand. Just a few recent twit-tweet examples…

Gee, and he wonders why some of those same conservatives and Republicans are blacklisting the Ralston Rag?

“This is not about me or our team of journalists whining about access.”

“Finally, a word on a laughable claim. Roberson, Laxalt and Heller have whispered that I am a Democratic partisan.”

“This has nothing to do with my supposed partisanship…”

If Blogger Jon wants the Ralston Rag to be taken seriously, he needs to take the same advice he regularly dishes out to President Donald Trump: Stop tweeting.

You can’t be taken seriously as an objective, unbiased news organization when your editor undermines that façade by regularly spewing anti-conservative/anti-Republican vitriol on social media.

Be an editor or be an unhinged blogger.  You can’t be both.  Not if you expect credibility.

“I have met guys who work the overnight shift at 7-Eleven, selling Slurpees and Camels to insomniacs, who have more introspection than a lot of people in the mainstream media.” – Bernard Goldberg, who wasn’t talking specifically about Jon Ralston…but could have been!