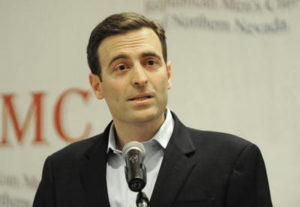 Nevada — Adam Laxalt, candidate for Nevada Governor, announced a series of policy priorities today aimed at empowering Nevada’s military veterans. Laxalt said that as Governor, he will work to address the crisis of veteran suicide, provide better communication with veterans about the services available to them, and promote policies that create opportunities for veterans to succeed in the workforce.

“Our men and women in the armed services put their lives at risk every day to defend our freedoms. We must stand with them and their families while they are abroad and when they return home,” Laxalt, an Iraq War veteran, told a group of veterans and supporters at Veterans Village in Las Vegas. “Tremendous work has been done on behalf of Nevada’s service members, veterans and their families in recent years. Governor Brian Sandoval made it a priority in his administration to make our state the most veteran-friendly in the country and he has the results to show for it. I look forward to building on his success.”

“This is an ongoing tragedy that must be faced head-on,” Laxalt said. “We must ensure that Nevada’s veterans who are struggling with the enormous challenge of returning to everyday life will get the support, care, and services they need. We owe these heroes nothing less.”

“As a veteran myself, I understand how crucial it is that those who have served our country receive the support they have earned and so richly deserve,” Laxalt said. “As Governor, I will continue to build on our recent successes and toward the goal of making Nevada the most veteran-empowering state in the nation.

“I’m extremely proud that as Attorney General, I’ve backed up my campaign promises with swift and effective action,” Laxalt added. “This includes the establishment of both the Office of Military Legal Assistance and the Law Enforcement Summit, two highly successful initiatives, during my first year in office. Today, I’m making a firm commitment to Nevada’s veterans, and my record shows that it’s a commitment they can count on.”

Laxalt also announced the formation of Veterans for Laxalt, a coalition of veterans supporting him in his campaign for Governor. He expressed his gratitude to the members of the coalition, including its chairs: former U.S.S. Cole Commander Kirk Lippold; Lt. General Buck Bedard, USMC; wounded Marine veteran Dylan Gray; and retired Army Colonel George Del Carlo.