Many Americans Want Work, But They Don’t Want To Mow Lawns

Many Americans Want Work, But They Don’t Want To Mow Lawns
N&V Staff 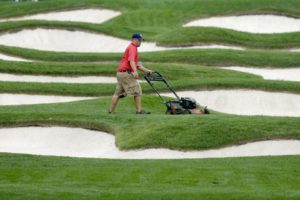 (ALEXIA FERNÁNDEZ CAMPBELL, The Atlantic) Most American homeowners are possessive and protective of their lawns, but they are less picky about who maintains them: One in three Americans who have lawns say they hired landscapers to maintain their yards in the past year. The national obsession with manicured lawns has helped propel landscaping into a$76-billion industry that has grown about 3 percent each year. Whether it means finding the right fertilizer or bagging up stray leaves, Americans are willing to shell out about $600 a year for someone else to handle their outdoor maintenance.

But finding people willing to do yard work is getting harder and harder for professional landscapers. Owners of landscaping businesses are saying that their biggest challenge is finding people who will prune bushes in the middle of the summer, in the heat, for the wages they pay. So it’s no wonder, then, that the landscaping industry has become the largest employer of foreign, non-agricultural guest workers. “It’s the very nature of the work. The guest workers who come over year after year are willing to put in the hours and difficult labor,” says Paul Mendelsohn, the vice president of government relations for the National Association of Landscape Professionals, a trade group. About 500 or 600 of the association’s roughly 2,500 member businesses use the H-2B visa program, which allows employers seeking seasonal help to bring foreign workers from abroad for up to 10 months at a time (and which is not to be confused with the more well-known H-2A program for agricultural workers).