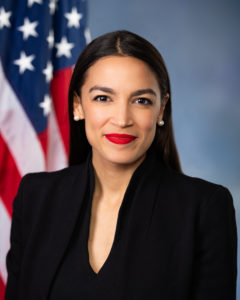 If you haven’t seen the short video of an 8-year-old’s impersonation of AOC – Rep. Alexandria Ocasio-Cortez – you’re in for a treat.

It’s both a brutal smackdown of the New York socialist and absolutely hilarious.  It’s a page right out Rules for Radicals: “Ridicule is man’s most potent weapon.”

Ever get a letter from an elected official that either says nothing or is loaded with BS?  Well, here’s a fun way to respond.

Whenever Charlie Jarvis received a dumb letter from a business, he’d return the letter to the company president or CEO with the following note attached (hat tip: Dan Kennedy)…

“Apparently some horse’s ass has stolen some of your stationary and is sending out letters that make you look stupid.  I thought you’d want to know.”

Question: What’s the best way to know that AB281 is a “sanctuary state” bill?

Or we could just look at, you know, the actual wording…

“No state or local law enforcement agency, school police unit or campus police department shall detain a person on the basis of a hold request, except where there is an independent finding of probable cause.”

In other words, police officers cannot detain a person suspected of being in our country illegally and “hold” them for ICE (Immigration and Customs Enforcement) without “an independent finding of probable cause.”

And what does “independent finding of probable cause” mean?

“A warrant which is based upon probable cause and which is issued by a federal judge, federal magistrate judge or a neutral and independent adjudicator.”

Of course, a warrant from a federal judge means the individual has to have committed a crime subject to the jurisdiction of a federal court.  Which excludes local or state crimes such as assault, rape or knocking off a liquor store.

Look, I don’t care if they’re arrested for jay-walking.  If, upon arrest, it’s discovered the person is in our country illegally, they need to be turned over to ICE.  Period.

If you don’t like it, then change the law.  Otherwise, enforce the law.  This ain’t that complicated.

“The Social Security program’s costs will exceed its income in 2020 for the first time since 1982—two years later than officials projected last year—forcing the program to dip into its nearly $3 trillion trust fund to cover benefits.

“But by 2035, those reserves will be depleted and Social Security will no longer be able to pay its full scheduled benefits, according to the latest annual report by the trustees of Social Security and Medicare.”

I’m sure Congress will jump right on this and fix it.

Cruise News!  Carnival is running a great special but only for the next 24 hours.

If you’d like to join us on Citizen Outreach’s 5th Annual Mexican Riviera cruise on the BRAND NEW Carnival Panorama next April (you should!), you can book today for a drastically reduced deposit (I think it’s only $125/person) ANDget an onboard credit of up to $50.

Next year’s cruise is gonna be our best one EVER.  Don’t delay; book today!