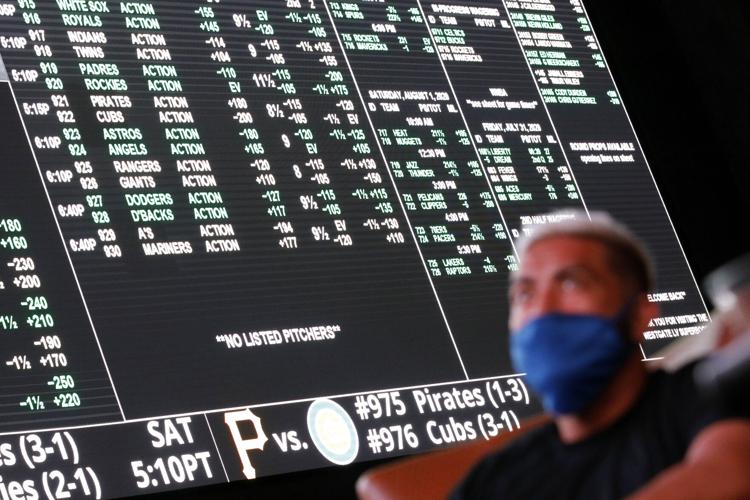 Betting odds are displayed on a board as people wearing masks as a precaution against coronavirus watch sports at the Westgate Superbook sportsbook Friday, July 31, 2020, in Las Vegas.
AP Photo/John Locher

ZenSports, a West Hollywood, Calif., startup company, will be allowed to operate its sportsbook at Big Wheel Casino in Reno and The Book at Baldini in Sparks. People who use the service exchange cash for “Zen Tokens,” which can then be bet against other users rather than a traditional casino house.

The board approved the business by a vote of 2-1, with Commissioner Rosa Solis-Rainey offering the lone voice of opposition.

NGCB Chair J. Brin Gibson described the company’s decision to move to Nevada as “exciting for the state.”

Mark Thomas, the company’s president and majority shareholder, told the board that the company decided to expand into Nevada following the surge of sports betting in the summer of 2020.

Thomas added that he hopes to one day accept other cryptocurrencies as part of the operation. However, the board’s approval requires ZenSports to limit the number of tokens it utilizes to its current stock.

ZenSports must retain a $25,000 contingency fund to cover any investigations of the company undertaken by NGCB, according to the approval.

Solis-Rainey expressed reservations about the outsized role Thomas plays at the company. Apart from being its chief executive, Thomas also manages its books and other duties. Solis-Rainey questioned whether a startup such as ZenSports could afford to replace Thomas if he left the company.

The company also admitted during a presentation it gave to the NGCB on August 4 that it hasn’t hired a compliance officer yet, which Solis-Rainey described as “troubling.”

“I don’t see this application as one where the company has demonstrated having the adequate experience or financing to warrant approval,” Solis-Rainey said, adding that she could support the application if it was for a manufacturing license rather than an unrestricted license.

“Having an unrestricted license while still relying on outside resources is concerning to me,” she continued. “Especially for a company of this size.”

Gibson said that the two-year limitation on the approval could work in Nevada’s favor, if the company succeeds.

“They have two years to get going, and I want to see them have an opportunity to go forward,” Gibson said. “They have 24 months to show to us what they’re all about. And I’m sure we’re going to be happy with that.”