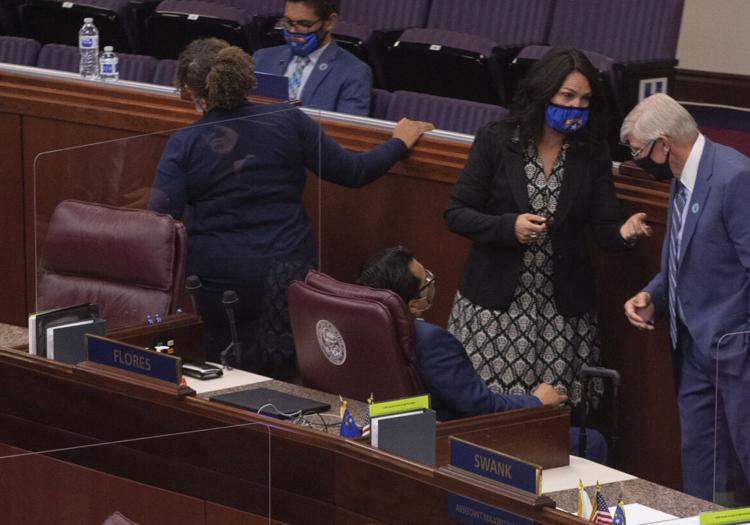 In this Friday, July 10, 2020, file photo members of the Nevada Assembly on the third day of the 31st Special Session of the Nevada Legislature in Carson City, Nev. Lawmakers restored $49 million for “optional” Medicaid programs that the federal government lets states choose whether to fund, including programs for prosthetics and behavioral health.
David Calvert/The Nevada Independent via AP, Pool

(Robert Davis) — Nevada lawmakers voted this week to restore last year’s cuts made to Medicaid to balance the state’s budget.

The vote Wednesday will add more than $301 million in total Medicaid funding. Over $125 million will be available this fiscal year, while an additional $176 million will be released over the next biennium.

“Encouraging news from the Economic Forum shows that the State is now projected to have enough revenue to avoid the anticipated cuts,” Gov. Steve Sisolak said in a statement.

“Medical providers have been on the front lines of the pandemic for more than a year, enduring untold stress, both financial and emotional. Restoring provider reimbursement rate cuts will help these small businesses and hospitals that have done so much to keep hard-working Nevadans healthy during this pandemic,” he continued.

During the 31st legislative session, lawmakers faced a $1.2 billion revenue shortfall created by the pandemic. To balance the books, they voted to cut 6% of funding from Medicaid, which placed increased financial stress on hospitals, laboratory and specialty clinics.

The program is funded through a federal-state partnership and any changes to its funding must be approved by a federal agency, the Centers for Medicare and Medicaid Services.

According to estimates from the governor’s office, over 800,000 Nevadans rely on Medicaid services.

Nevada Medicaid Administrator Suzanne Bierman said in a statement that she is relieved to see the cuts disappear.

“We worked day and night to comply with budgetary reductions from the 31st Special Session. However, we are pleased that these cuts are no longer necessary,” she added.

The state’s Economic Forum said on May 5 that it expects Nevada’s revenue to rebound in late 2021. The panel said they anticipate state revenue to be $582.6 million more than what the body projected in December 2020.