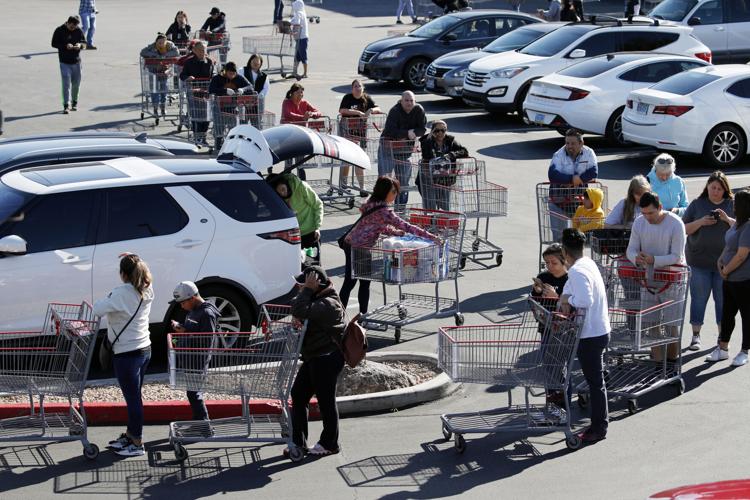 A line of people waiting to buy supplies amid coronavirus fears snakes through a parking lot in Las Vegas on March 14, 2020. AP Photo/John Locher

The citations come after Gov. Steve Sisolak earlier this month announced a “targeted approach” on enforcement for businesses and residents not following the necessary physical distancing regulations and public health standards meant to reduce COVID-19 spread.

Ten of the businesses cited for the week beginning Aug. 10 are in Clark County and the Las Vegas Valley area. Over 700 initial inspection visits were conducted over that week, the Nevada OSHA said.

A Neiman Marcus location in the Fashion Show Mall located off the Las Vegas strip was cited for non-compliance. The prior week, several stores in the same mall were also cited, including Forever 21, a location of Saks Fifth Avenue, and Shiekh Shoes, all receiving fines of $8,501. Neiman Marcus received a fine of the same amount.

The only citation issued outside of Clark County was for an auto garage in Fernley, Nev.

“Since observations began in late-June to determine compliance with mandated health and safety measures under the Governor’s Declaration of Emergency Directive 024 and Nevada OSHA’s Guidance for Roadmap to Recovery, DIR officials have conducted 6,145 initial visits at business establishments finding a cumulative 88 percent statewide compliance rate, a 90 percent compliance rate in northern Nevada and 87 percent compliance in southern Nevada,” a press release said.