Fake News from a Real Criminal

(Chuck Muth) – On Sunday, the Las Vegas Review-Journal published an op-ed written by an ex-con/social justice warrior named Jovan Jackson who urged some 77,000 ex-felons to vote in November after Nevada Gov. Steve Sisolak and Democrats in the Legislature restored their voting rights during the 2019 session.

But while reading this guy’s self-serving column, I couldn’t help but think there was more to his story than he was letting on.  So I did a little checking.  And sure enough…

“In 2016, I was working in health care but suffering from a drug abuse problem. I suffered a mental health breakdown and  was unable to access our state’s mental health services – services our state just further cut – and I was arrested. If help had been available and I had received the inpatient treatment I needed, I likely would never have ended up where I did. I served a two-year sentence for a conspiracy of robbery charge and was released in 2018.”

“As someone who was formerly incarcerated, I can now vote for or against the people who create and implement the laws and slash the funding for resources that put me behind bars. To many, they may just be names on a sign in front of a polling station. But for us, they are the ones whose decisions shaped our lives and our futures. Yet until now, they have been held accountable only by those fortunate enough to have never had their right to vote taken away.”

What load of crap.

First, drug abuse is not contagious like the CHINA-19 virus.  You CHOOSE to be a drug abuser, unless someone has a gun to your head.  So that’s on Jovan.

Secondly, he wasn’t arrested for having a “mental health breakdown.”  He was arrested for, you know, breaking the law.  More on that in a minute.

And lastly, those who have never had their vote taken away aren’t “fortunate.”  They’re law-abiding citizens.  They made better personal choices that didn’t result in time behind bars.

If you buy what this guy is selling, he’s just a poor unfortunate who was abused by our criminal justice system.  It wasn’t his fault, right?

It never is.  Sorry, Charlie, that dog won’t hunt.

As for Jovan’s claim that he was “unable to access our state’s mental health services” and “served a two-year sentence for a conspiracy of robbery charge,” here’s the rest of the story, as culled from public records…

On June 9, 2014 he was arrested for DUI and drug possession.

He was arrested again on February 28, 2015 for battery, property damage and resisting arrest while the prior charges were still pending.

On March 4, 2015 a competency evaluation was ordered by the Clark County district court.

On March 6, 2015, Jovan refused to appear in court on the new charges.

On May 21, 2015, Jovan was arraigned on the charges and his attorney advised the court that Jovan had been found competent.

He was then released on his own recognizance (O/R) by Judge Suzan “Get Out of Jail Free” Baucum.

On June 11, 2015, a bench warrant was issued for his arrest after he failed to appear in court (which is why we have a bail system, by the way).  He was subsequently arrested again.

On June 16, 2015, Jovan told the court he wanted to represent himself on the charges (a fool for a client).

In November 2015 the original drug charge was dropped and he was found guilty of the DUI charge.

He pled nolo contendere (no contest) in December 2015 in which the property damage charge was dropped, the battery charge was reduced and he was found guilty of resisting arrest.

In addition, Jovan has had some scrapes with the law in Henderson and Las Vegas, as well…

He was cited in Henderson with a speeding ticket in August 2010.  A precursor of what was to come.

He was arrested in Las Vegas in 2011 for drug possession and possession of drug paraphernalia.

In 2014 he was arrested for disorderly conduct.

None of which resulted in jail time.  He was given multiple “second chances.”

On November 5, 2015 he was arrested for felony robbery and first-degree kidnapping with a deadly weapon.

On January 12, 2016 Jovan accepted a plea to a lesser charge of felony/gross misdemeanor “conspiracy to commit robbery.”

On June 16, 2016, he was found guilty and sentenced to 18-60 months in prison.  However, that sentence was suspended and Jovan was granted probation under “intensive supervision.”

He then violated his probation when his probation officer caught him taking pictures of himself with guns and posting them on Facebook and Instagram.

And THAT’S why he ultimately ended up in prison.

Oh, and while in the hoosegow he was offered in-patient mental health services.  But Jovan refused them; insisting on out-patient treatment.  Which, of course, isn’t available while you’re, you know, locked up.

So much for his claim that he was “unable to access our state’s mental health services.”  He wasn’t “unable.”  He was unwilling.

On June 26, 2018, Jovan appealed his conviction to the Nevada Supreme Court.

On May 15, 2019, the Supreme Court rejected the appeal.  As such, he was required to complete his prison sentence.

Jovan would have us believe he’s turned over a new leaf and is now on the straight and narrow.  I hope that’s true.  I wish him well.  However…

For Jovan to blame anyone but Jovan for the bad decisions Jovan made that resulted in Jovan spending time in the pokey is ridiculous.

And now you know…the rest…of the story.

“There’s a reason the newly announced list of two dozen ‘Republicans for Biden’ is comprised of former GOP congressmen… Trump didn’t destroy the GOP, he saved it from people like (Jeff) Flake and (John) Kasich.” – John Daniel Davidson, Political Editor at The Federalist 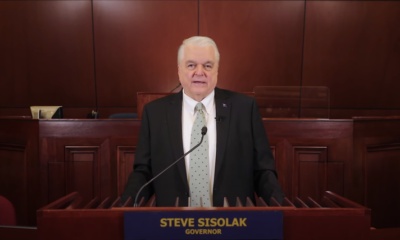