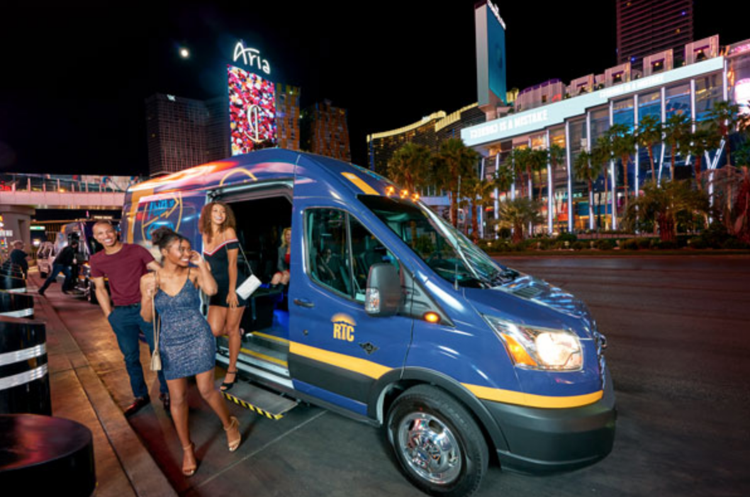 The Regional Transportation Commission of Southern Nevada (RTC) recently launched a ride-sharing app and transit fleet, Trip to Strip, to compete with Uber and Lyft on the Las Vegas Strip.
Image courtesy of RTC screenshot

A ridesharing pilot program launched by the transit authority in southern Nevada has brought in a little more than $62,000 while costing $1.4 million in its first two months.

Trip to Strip, launched by the Regional Transportation Commission of Southern Nevada (RTC), seeks to compete with the likes of Uber and Lyft at a time when ridership and revenue on the strip has been dropping.

The program is the first of its kind and will undergo a cost-benefit analysis after the pilot is complete, RTC CEO Tina Quigley said.

“We have been in operation for a month and are closely monitoring our revenues and expenditures in addition to seeing how the contractor will maximize opportunity for revenues,” Quigley said. “At the end of the pilot, we will evaluate the data collected and conduct a cost-benefit analysis to determine the viability of the service for our customers.”

Trip to Strip, which functions as a rideshare phone app, offers high-end vans that seat up to 11 people and doesn’t use competitive “surge pricing” when prices go up as more people request rides on the app. The fleet runs in the Las Vegas strip between McCarran International Airport and Sahara Avenue, and rides start at $6 a trip, the RTC says. It’s conducted almost 13,000 rides since its inception.

“The Trip to Strip Service was designed to be a micro-transit on-demand pilot project on the resort corridor that would be evaluated after 6 months of being in operation,” RTC said. “Based on feedback that we received from our customer satisfaction survey on the resort corridor, 82 percent of those surveyed on the Las Vegas Strip said they would try a same day on-demand service offered by the RTC.”

The program is also a response to private ridesharing apps like Uber and Lyft, which have syphoned riders – and revenue – from bus routes along the strip.

The commission approved $3.6 million in April for the ridesharing pilot, which can last for two six-month periods, then can be renewed by the board.

“The sustainability of the RTC is contingent upon being progressive, being out in front of technology change and taking chances,” RTC Chairman Larry Brown has said. “There’s risk involved but unless we’re willing to take that chance, then we will find ourselves so far behind the eight ball on mobility that we won’t recover.”

“Too early to see if it will be cost-effective or not, but I think the desire to improve service is commendable,” he said, noting that the RTC spends around $550 million a year.

Americans for Prosperity-Nevada said it’s a waste of taxpayer dollars.

“Funding a failing transportation system isn’t an expense that Nevadans should be shouldering,” said Juan Martinez, AFP-Nevada state director. “This program intends to fill a gap that is already better served through platforms easily available on a standard smartphone. It’s a waste of people’s hard-earned money.”

When asked to respond to critics who might say the program isn’t an effective use of taxpayer dollars, Quigley indicated the program is necessary for changing times and said testing technology will help explore more efficient ways of transit.

“How public transportation looks today is going to be very different in the future and it’s not a one size fits all solution,” Quigley said. “It is our job to be relevant and to test, pilot and demonstrate different technologies that maybe much more efficient and effective than traditional bus service.

“We need to be able to better understand what mobility technologies are out there and if and how they can be beneficial to both our residents and visitors,” she added. “We have partnerships and pilots with ridesharing companies and other private companies who are demonstrating these technologies, and where it makes sense we will further explore these opportunities.”

The Center SquareNovember 5, 2022
Read More
Scroll for more
Tap
The Deep State and The Dumb State
Dear NRCC Members: Come Out, Come Out, Wherever You Are!