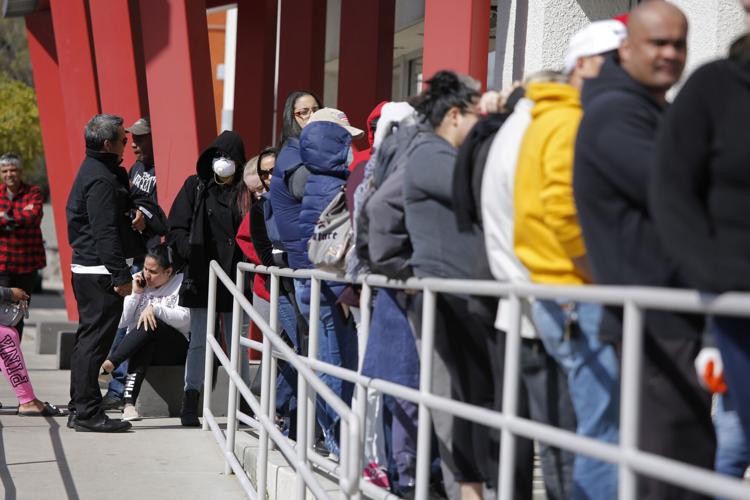 In this March 17, 2020, file photo, people wait in line for help with unemployment benefits at the One-Stop Career Center in Las Vegas. A Nevada judge says the state unemployment benefits office has to begin paying pandemic relief benefits to out-of-work gig and independent workers who haven’t completely stopped working and were cut off from receiving payments.
AP Photo/John Locher

(Michael McGrady) — Nevada’s unemployment insurance claims have dropped to pre-pandemic levels, according to the state’s Department of Employment, Training, and Rehabilitation (DETR).

DETR said initial claims for unemployment insurance totaled 8,858 for the week ending on August 22. That number is down about 19 percent, or 2,080 initial claims from the previous week’s total of 10,938 claims.

“This is the fewest initial claims filed since the week ending March 14,” DETR said in a press release.

The state has seen 640,716 initial claims filed since the COVID-19 pandemic began in mid-March.

The Pandemic Unemployment Assistance (PUA) program saw 10,871 claims filed during the week ending on August 22, a decrease of 1,485 claims, or 12 percent, from the previous week’s 12,356 PUA claims.

DETR saw increases in the number of applicants for the Pandemic Emergency Unemployment Compensation (PEUC) program, which is a compensation program for individuals who might have exhausted their unemployment benefits provided through other state programs.

The PEUC claimants totaled at 21,365 for the week, which is an increase of 1,837 claims from the prior week.