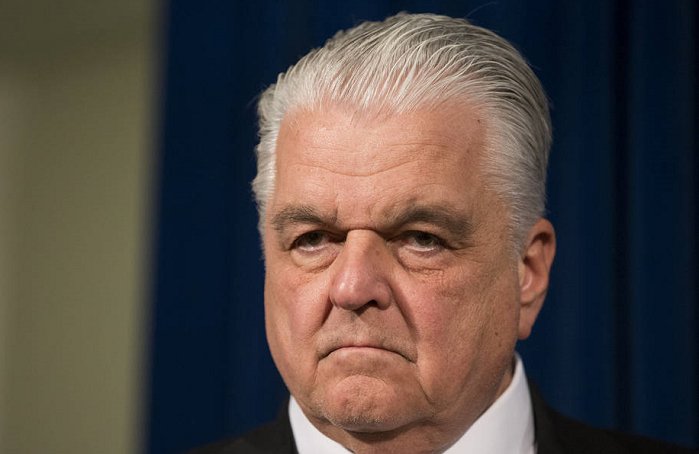 (Chuck Muth) – Ever since ordering the state’s economy to shut down and putting hundreds of thousands of private sector workers out of work and shuttering thousands of “non-essential” businesses, Nevada Gov. Steve Sisolak has claimed his decisions haven’t been “political.”

The most stark example is his support for the Black Lies Matter “peaceful riots” – where thousands marched, maskless, in the streets shoulder-to-shoulder – while orchestrating an effort to block an “Evangelicals for Trump” rally.

Now he’s using the CHINA-19 scamdemic to raise money for himself and Nevada Democrats.

In an August 31 fundraising email, “Team Sisolak” warned that “Steve is up against an end-of-month deadline” and needed “grassroots donors to chip in before midnight…to keep this fight focused on Nevada’s priorities – like recovering from the COVID-19 pandemic.”

The email went on to warn that “voters face one of the most important elections in their lifetimes in the midst of a health and economic pandemic.”

Of course, they didn’t note the economic pandemic has been created by the governor himself.

“Keeping Nevada blue is essential to taking back the White House,” the email continued.

Yet we’re all supposed to believe that his decision to keep the state on lockdown indefinitely isn’t “political.”

Political fundraising – literally off the deaths of Nevadans who have succumbed to the CHINA-19 virus and the thousands upon thousands who have lost their jobs, homes and businesses – is nothing short of sickening.

And Democrats in the Legislature are accomplices.  They’ve been united in supporting every misstep, mismanagement and ill-advised action Gov. Sisolak has taken over the last six months without a peep of protest.  They are complicit in their silence.

Of course, Gov. Sisolak isn’t on the ballot in November.  But Democrat legislators are.  If Nevadans want to loosen the death grip the governor has on our state’s economy, they need to be voted out.

DETR Finally Coming Out of Hibernation?

My daughter filed for unemployment back in April.  She then left the state after finding employment in Virginia.  Still, she’s owed back benefits.

So we sent an email to DETR (Department of Employment, Training & Rehabilitation) asking how to file retroactively to get the enhanced benefits authorized by the CARES Act.

On Friday, exactly FOUR MONTHS later, we finally got a response from DETR – which provided absolutely no help whatsoever…

“Thank you for your email.  The Internet Help Desk is not able to look up your claim due to lack of information provided to identify yourself. Please provide your full name, your Claimant ID# or the last 4 of your SSN, your date of birth and your current address.  If you are filing online,”

Note: Our question wasn’t claim specific.  It was a general “how to” question related to problems finding information on DETR’s website – a question that does not require a claim ID#, SSN, DOB or current address.

In the meantime, the claim remains unprocessed.

If you haven’t signed up to receive my new The Daly Show e-newsletter focusing on the trials and tribulations of Assemblyman/Union Boss Skip Daly (D-Organized Labor), you missed…

And coming up next on The Daly Show:

You don’t want to miss this one!  Sign up now at: skipdaly.info

From Assemblywoman-elect Annie Black: “Sisolak’s Last Supper: Pizza for Me but Not for Thee!”  Click here

“President Trump’s approval rating is back up to its pre-pandemic high of 52 percent, according to a Rasmussen poll.” – FOX News, 9/4/20

“Trump received 28% of the Hispanic vote four years ago. But a fresh national @QuinnipiacPoll pegged the president’s support with this demographic at 36%.” – Frank Luntz (#LandslideComing)

“Trump will absolutely demolish Biden with 45% of the Black vote. We see it in our data every day. The Democrat party is shrinking. Daily, people who were reliable Dem voters, are donating to the President!” – Gary Coby, digital director for Trump campaign

“While the China Virus is real, everything around it reeks of politics and scams. If Obama/Biden were in power now, the entire pandemic would get two minutes a week on CNN, if that.” – James Woods

“Right-wingers, conservatives, and other normal people should not engage these people (protesters/rioters) at all. Do not go and counter protest them or anything. Let them do their damage and let Democrats suffer for it in November. Any misstep by the political right and the media will skew everything.” – Ryan Saavedra

“It saddens me that so many publications and journalists are so partisan that we will never see stories about what it’s like to be a police officer in today’s age. Their lives, and the lives of their families, are being put through hell right now.” – Ian Miles Cheong