One Heller of a Problem

One Heller of a Problem
N&V Staff 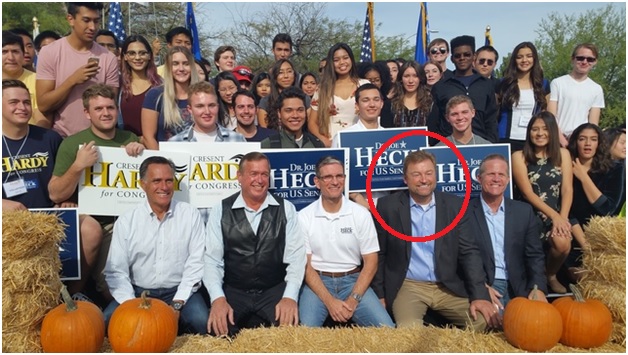 (Chuck Muth) – It appears that Republican Nevada U.S. Sen. Dean Heller believes the path to re-election in 2018 is to constantly poke a finger in President Donald Trump’s eye.

On Friday he announced – with much public pomp and circumstance at a press conference with “Never Trump” Gov. Brian “America’s Worst Governor” Sandoval – that he opposes the Senate’s version of ObamaCare repeal-and-replace.

To be fair, there are four other GOP senators who have also voiced public opposition to the bill as is.

The difference, however, is that the other four object because they say the bill isn’t conservative enough.  Heller’s argument, on the other hand, is that it’s not liberal enough.

Specifically, Heller criticizes the bill for removing a number of people who hopped on the Medicaid gravy train who never should have been allowed to board in the first place after Sandoval foolishly expanded the program a couple years back.

Heller’s opposition is significant since Republicans only have a 2-seat majority in the Senate, and we already know not a single Democrat – even if being water-boarded – will ever vote to repeal ObamaCare.

“If Heller thinks kowtowing to the incredible amount of TV shots at him will make Democrats vote for him, he’s sadly mistaken,” wrote one Muth’s Truths subscriber yesterday.

“YES, vote OUT Dean Heller – very disappointed in him,” wrote another.

“Heller the RINO is a disgrace,” chimed in another.

“I sure hope someone primary’s Heller next year,” wrote David Spencer in an email attached to a photo of Nevada’s “Never Trump” caucus from last October.  “That person will have my vote.”

“There is no way in the world that the Nevada Republican Trumpster/conservative base is going to support Heller in 2018,” Spencer continued.  “Without them, Heller’s U.S. Senate re-election campaign is doomed. I hope he’s replaced by a real conservative in his primary next year.  That is the only way the GOP is going to retain Heller’s seat.”

Indeed, Heller’s action on repeal-and-replace could well be the proverbial straw that breaks the camel’s back for a lot of conservative Republicans who would vent their spleens in the general election.

As Las Vegas Review-Journal columnist Steve Sebelius wrote this morning, many such grassroots activists and voters “likely will take their anger to the polls, either by voting for a third party, voting for ‘none of these candidates,’ or not voting at all.”

“Either way,” Sebelius concluded, “Heller is in jeopardy.”

Which is why there are growing calls for a GOP primary opponent.

But here’s the problem, folks: You can’t beat somebody with nobody.

What conservative Republican in Nevada has the name ID, the fundraising capability, the campaign experience…oh, and the cojones to run against Heller, his attack-dog consultant Mike Slanker, and the entire wishy-washy moderate GOP establishment in a primary?

Absent a viable, credible candidate, Heller will win the GOP nomination and go into the general election against clean-slate freshman Rep. Jacky Rosen (D-Derpa-Derpastan) with no GOP base of support.  If the election were held today, he’d be toast.

And Nevada, which SHOULD have two Republican U.S. senators, will end up with…none.

“U.S. Sen. Dean Heller, R-Nev., is still playing coy on who he will vote for on Nov. 8.  Heller is one of the few senators who outright refused to endorse Republican nominee Donald Trump, but has also come out against Democratic nominee Hillary Clinton. In August, he said…he was ‘100 percent against Clinton, 99 percent against Trump.’ . . . In the past, Heller has floated the idea of voting for “none of the above,” a protest vote option that exists in Nevada.” – Seth Richardson, Reno Gazette-Journal, 10/20/16

The Center SquareJune 18, 2022
Read More
Scroll for more
Tap
The Dark Side Of The Sun: Nevada Gives In to Solar Bullies
Google Takes YUGE Step toward Making Americans Employed Again