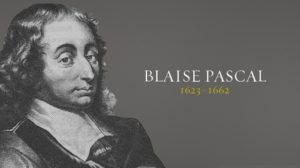 (Bill Saracino, California Political Review) Though born a few years after the official end of the Renaissance, Blaise Pascal was a true Renaissance man. He was a French mathematician, physicist, inventor, writer and top notch Christian philosopher. His most famous work is the bookPensees. The most famous item in that tome is a discourse on why it is logical and rational to live a Godly life even if you don’t believe in God.

This has become known as “Pascal’s Wager,” and can be summarized thusly: A rational person should live as though God exists. If God does not exist, you lose nothing except some worldly pleasures by believing in Him. But if God does exist, you gain eternal life by living a good life, but will suffer eternal damnation if you deny Him through a life of debauchery. (A giant hat tip to Father Lawrence at St. Francis High School long ago for patiently taking the many, many hours necessary to get this across to a bunch of thick-skulled seniors in “Apologetics” class.)

Pascal’s wager has become my fire-wall in arguing with the Kool-Aid drinkers of  NeverTrump. Backed into a corner on the fact that a federal judiciary appointed by a President Hillary is a clear and present existential danger to all things conservative, the last refuge of these scoundrels is that Trump can’t be believed. They say that Trump’s list of potential Supreme Court appointees – developed with the input of the impeccably upright and conservative Heritage Foundation and Federalist Society – is a scam, that he has no intention of appointing such stellar conservatives to the courts.

This is where old pal Blaise comes in. His wager applies to the Trump v. Clinton presidential choice in this way: If the NeverTrump folks are right and I am wrong – if Trump’s court appointments would be mediocre at best and as bad as Hillary’s at worst – then we are no worse off by voting for Trump. Whether he wins or loses, we still have an awful judiciary.

However, if I am correct and the NeverTrump folks are wrong, then Trump’s court appointments will be full of young Antonin Scalias and Clarence Thomases. That represents the difference between salvation for conservatives and our values from a Trump judiciary and the gang rape of the Constitution which is certain with a Hillary-appointed judiciary. This is a wager that ought to be obvious even to the most deranged NeverTrumpster. The only rational bet, the only safe bet – vote – is for Trump.

Rational thought, however, has never been a strong point of the NeverTrump cabal, and NeverTrump-land has lately become a logic-free zone. They obsess on irrelevancies, frothing about how much rent he charges his campaign office in Trump Towers, but ignore Hillary making the State Department a giant cash laundromat for her foundation. Hillary lying to the families of the four Americans murdered in Benghazi is not as important to them as how many copies of “The Art Of The Deal” the campaign has purchased.

NeverTrump-land is inhabited by large egos and small minds, happy to play into the hands of the left-wing media to elect Hillary. No minor official who served in a previous Republican administration is too obscure not to be given breathless headlines and interviews as they denounce Trump. Any former Fourth Assistant Undersecretary to the Chief Deputy Paper Shuffler in the Department of Swamps and Sewers is guaranteed 15 minutes of fame if he or she will wax hysterical about the dangers of Trump.

On the other side of this divide is an a group of self-appointed conservative grandees – inside the D.C. beltway, insulated, isolated from the real world. Led by Billy Kristol, Bow Tie Will and National Review magazine, NeverTrump has devolved into a group of holier-than-thou pearl clutchers. They are the new puritans, horrified that this brusque, brash brute from New York dared to rouse the rabble in fly-over country, and did so without their permission.

Kristol and Will fit Vice President Spiro Agnew’s description perfectly of “nattering nabobs of negativism” and “effete, impudent snobs.” National Review was once a great magazine, founded by conservative giants Bill Buckley and Bill Rusher. As they rail against Trump, the new puritans currently running National Review have made it largely irrelevant. By embracing NeverTrump they are ignoring one of Buckley’s most famous bits of advice. He said that when faced with a choice between less-than-perfect candidates, conservatives should always choose “the most rightward candidate with the best chance of winning.”

Hmm, the most conservative candidate with a chance of winning. That’s apparently a tough one for our new puritans.

In closing, I want to once again make clear that I am well aware of Trump’s imperfections, both as a person and as a candidate. However, none of those imperfections threaten the future of the country. Hillary appointing far-left zealots to the federal judiciary and bureaucracy absolutely does. Longtime conservative warrior and comrade-in-arms Allen Brandstater  (we met in 1965 in “Youth For Reagan For Governor”) put the choice this way: “It’s between castor oil, which is unpleasant but won’t kill you and arsenic, which will.”

Bill Bennett, Secretary of Education during the Reagan years, put it a bit more elegantly: “Our country can survive the occasional infelicities and improprieties of Donald Trump. But it cannot survive losing the Supreme Court to liberals and allowing them to wreck our sacred republic. It would reshape the country for decades.”

Pascal’s wager would no doubt be on the castor oil, infelicities and all, instead of the arsenic.