My Weekend at the Moonlite Bunny Ranch

My Weekend at the Moonlite Bunny Ranch
N&V Staff

(Chuck Muth) – Oh, the sacrifices I make for my readers in the interest of education!

They say politics makes strange bedfellows, but this gives the phrase a whole new meaning.

Dennis Hof owns the Moonlite Bunny Ranch in Carson City – the flagship of seven legal brothels he owns in Nevada – along with dozens of other successful businesses.

For those of you with HBO, you may have seen the reality show he starred in called “Cathouse.” It’s been off the air since 2007 but still airs in re-runs.

Anyway, the “ladies (and men) of the evening” who work at that other Carson City brothel – the government-owned one known as the “Nevada Legislature” – royally screwed taxpayers last year by passing the largest tax hike in state history.

That tax hike included the creation of a new business income tax – similar to the one 80 percent of us rejected at the ballot box a few short months earlier! – along with a new “Nevada IRS” to enforce paperwork compliance from businesses that don’t even owe the tax!

To put it mildly, this did not make Mr. Hof a happy camper – especially when you consider the truckloads of taxes he already pays.

And RINO Assemblyman James Oscarson, who represents the rural district where two of Mr. Hof’s brothels are located, broke his word to constituents and voted for the hike.

So last March Hof filed to run against Oscarson.  And a mutual friend suggested he and I meet to discuss his campaign.

And our Citizen Outreach PAC had already endorsed Mr. Hof.  So the two of us had dinner in Vegas a couple weeks ago and hit it off immediately.

But I knew virtually nothing about the brothel industry and had never been to one (wives, for some reason, are funny about things like that).

So while Dennis and I were in Lake Tahoe attending the recent Donald Trump fundraiser, he invited me to spend the weekend and take a tour of the Bunny Ranch and three of his other properties right down the street.

I gotta be honest: I approached the gate with considerable angst and nervousness.  I had my own pre-conceived notions of what a brothel would look like on the inside and what would be going on (aside from the obvious).

But it turns out it was nothing at all like what I thought it would be.

I really expected to feel as uncomfortable as Jesse Jackson being asked to pick up the white courtesy phone at the airport (stole that one from Larry the Cable Guy), but ended up feeling more at home than I do at my neighborhood bar down the street in Las Vegas.

In fact, it was actually great fun – even though all I did was sit at the Bunny Bar and have a few cocktails with Dennis and some of his provocatively-dressed friends. 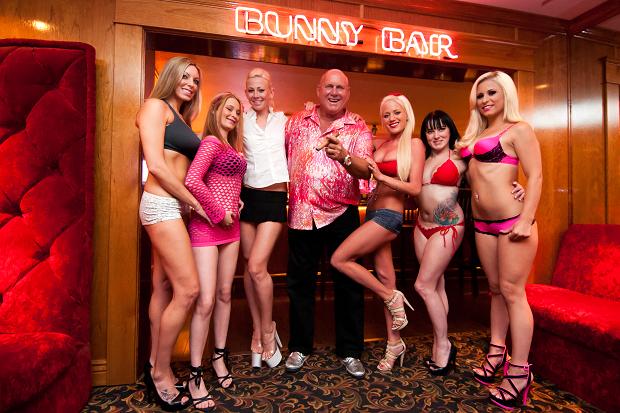 I learned an awful lot that I didn’t know and had a lot of myths dispelled.

Look, I know many people have moral objections to this industry, and that’s fine.  I completely understand and respect that.  But this is a legal business in Nevada in which grown adults voluntarily negotiate an arrangement for payment of services rendered.

In fact, when you think about it that way, it’s just like donating to James Oscarson!

There is one thing I still don’t understand.  I learned that brothels aren’t allowed to advertise.  Yet politicians can.  And do.  That ain’t right.  There ought to be a law.

And I know just the guy to introduce it!

Politics aside, let me share some of my experience in getting to know some of the folks I met on my field trip to Dennis’ “Disneyland for Adults.”

Here was my first misperception…

Having driven past the brothels with the little red light flashing on my many road trips between Las Vegas and Carson City over the years, I was half-expecting some seedy building with paint peeling and holes in the floor like you’d find in some redneck trailer park.

Boy, was I wrong!  At least at Dennis’ places.

The bar and lounge areas are as modern, clean and fully stocked with liquor as anything you’d see in a hotel chain.  And there are pools, outdoor wooden decks, BBQ’s, exercise rooms…everything you’d expect to find at a first-class resort.

Dennis himself is an absolutely amazing person – and I’d only known him for exactly two weeks when I wrote this column from the guest suite he was gracious enough to put me up in behind the ranch.

This was no Holiday Inn Express!

I think Dennis would be OK with me sharing a pic of the room, so here ya go… 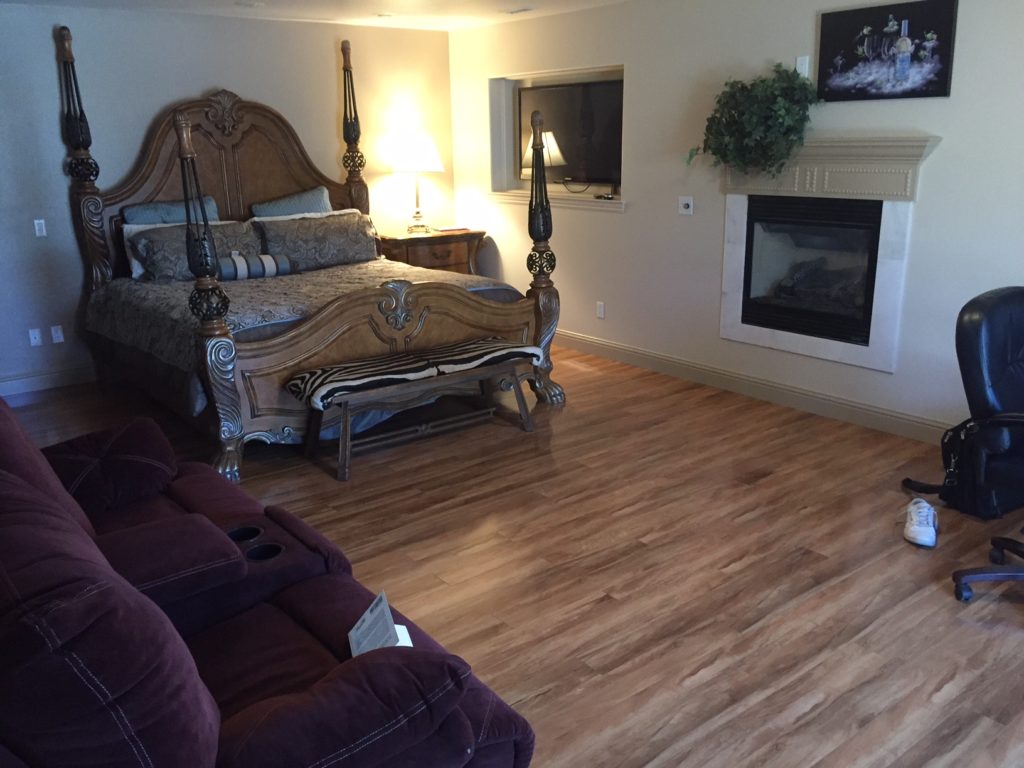 I know he refers to himself as a “pimp” – and I know Oscarson’s paid political assassins are going to make that his middle name in the campaign.

But after spending time with Dennis and seeing his operations and meeting some of the folks who work there, a more apt description would be “Entertainment Director.”  And he’s really, really, REALLY good at it.

And while he’s certainly a very public figure who said he has no problem with me writing about his operation, discretion understandably dictates not mentioning any of the patrons I met.  Except one…

The only reason it’s OK to write about Bob is that Bob wrote the introduction to Dennis’ autobiography, “The Art of the Pimp.”   And I know he has no problem with folks knowing he was there.

Dennis introduced me to Bob at the Trump dinner.  He’s a writer and producer who is perhaps best known for his close relationship to the late comedian, Andy Kaufman.

Bob also founded Comic Relief, an annual event that raises money for the homeless.  The first one in 1986 was co-hosted by Robin Williams, Billy Crystal and Whoopi Goldberg.  Bob tells me the event has now raised over $90 MILLION for the cause!

Can this man tell some stories?  You better believe it.  And another of the nicest guys you’d ever want to meet.

Wanna hear about the girls?

Again, this was another huge mis-perception blown to smithereens.

I half-expected to find hookers like the ones portrayed in most TV shows and movies.  Skanky airheads with meth needles hanging from their arms.

Boy, was I wrong!

Alas, discretion dictates I not disclose anyone’s name or background without their permission.

But I can assure you some who I talked with had college degrees coming out their wazoos and a number had extensive successful experience in the corporate world.

On the other hand, the very personable young lady who gave me a tour of the beautifully renovated Kit Kat Ranch had a Denver Broncos jersey hanging from her wall.  So nobody’s perfect (I kid!).

But what really struck me was exactly how MUCH she and a number of other girls knew about sports.

These gals are total pros.  They know that most men are interested in sports – and their business is making men happy.

So they make sure they know as much about sports as almost any guy you’d find in a sports book or Buffalo Wild Wings. Makes perfect sense.

Or maybe they just like sports.  Lots of women do.

Though I’m still not sure if we were talking about the same thing when it came to “tight ends” and “wide receivers”!

Everybody I met – from the girls to the bartenders to the hostesses to the managers to the limo driver (an “Oakland” Raiders fan!) – was as friendly and personable as could be.  Far more so than many of the people working in many of the high-end resorts, restaurants, bars and clubs on the Strip.

Again, I recognize many you have BIG problems with the morality of prostitution – legal or otherwise.  And that’s fine.  I get it.

I’m just more of a live-and-let-live kind of guy.  Whatever floats your boat, as long as it doesn’t interfere with someone else’s life.

All I’m saying is that the legal brothels and prostitution at Dennis’ establishments ain’t nuthin’ like what I expected – or you probably envision.

And as with every other form of entertainment in Nevada, we just do it bigger and better.

N&V StaffMay 18, 2017
Read More
Scroll for more
Tap
When It Comes to the Las Vegas Stadium, Should We Listen to Jim Murren?
India’s Komenda Sugar Factory vs. U.S. Sugar Program