Quarter-Cent Tax Scam Needs a Wooden Stake Through Its Heart 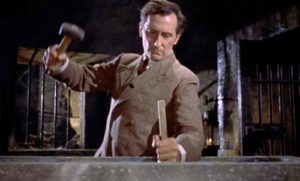 Ronald Reagan understood the nature of government like no one since our Founding Fathers.  And this Reagan quote is about as immutable as “what goes up must come down”…

“No government ever voluntarily reduces itself in size. Government programs, once launched, never disappear. Actually, a government bureau is the nearest thing to eternal life we’ll ever see on this earth!”

Same goes for “temporary” tax hikes foisted upon citizens to pay the freight.  The latest example…

Back in 1998, Clark County (NV) voters approved an advisory question for a “temporary” quarter-cent hike in the sales tax for “water and wastewater infrastructure” projects.  That tax, as passed, was set to expire – “sunset” in political-speak – in 2025.

And while a quarter-cent sounds like a piddling amount, a quarter cent here and a quarter cent there adds up to a pretty humongous figure.  In fact, since 1999 that little quarter cent added to your sales purchases has totaled up to a whopping $1.4 BILLION dollars.

Nevertheless, a move is afoot by government bureaucrats urging the Clark County Commission to remove the “sunset” clause and make the tax hike permanent – you know, just like how Gov. Brian Sandoval and the 2015 Nevada Legislature made those “temporary” tax hikes passed during the Great Recession permanent.

The Las Vegas City Council is considering a resolution in support of the lobbying effort by the Southern Nevada Water Authority (SNWA) to make the quarter-cent tax hike permanent.  In a November 21, 2018 memo to the council from the Director of Administrative Services, Ted Olivas wrote…

“This stable revenue source is needed to maintain the credit worthiness of water agencies and keep water bills affordable for customers.”

Let me ask you a question: Do you think your water bill is “affordable”?

Indeed, back in December 1997, Southern Nevada Water Authority spokeswoman Jeanine Klein said that “Residential customers will be charged a quarter-percent reliability surcharge, resulting in a 7 to 10 cent increase for the average user at $26 a month.”

Anybody out there still paying anywhere near $26 bucks a month for their water?  Didn’t think so.  Here’s why.

Hearken back, dear taxpayer, to this article by Henry Breen of the Las Vegas Review-Journal on December 3, 2013…

“Ever feel like your water bill goes up every year?  Get used to it.  On Tuesday, the Clark County Commission, sitting as the board for the Las Vegas Valley Water District, unanimously approved a series of annual rate hikes scheduled to begin in January and top out in 2017.  All customers, from the smallest home to the largest resort, can expect to see their bills go up…”

And they ain’t done yet.  From SNWA’s current website…

“In 2017, the Las Vegas Valley Water District Board of Directors approved a change to water rates to support the LVVWD’s capital improvements efforts over the next decade. The Water District is investing more than $600 million to upgrade, replace and expand pipelines, pumping stations, reservoirs and other infrastructure vital to the operation of the community’s water system.  Beginning in January 2018, typical monthly residential water bills will increase by about 75 cents as the second phase of the rate modification takes effect.”

Something smells here…and it ain’t the wastewater treatment plant near my home!

Sounds to me like there’s either some mismanagement going on, or mission creep, or taxpayers have once again been scammed by the ol’ bait-and-switch.

Oh, and here’s the most dishonest part of the scam…

Under the “Fiscal Impact” heading of his memo to council members, Olivas listed: “No Impact.”

That’s pure, unadulterated bull droppings.  And it’s the same scam Republicans pulled in 2015 to justify voting to make the “temporary” tax hikes passed in 2009 permanent.  They claimed that nobody’s CURRENT taxes would go up; therefore, it wasn’t a tax “increase.”

But the lie lies within the fact that the tax increase was originally sold as being temporary; that the temporary tax would eventually go away; that your taxes would one day be LOWER again. That’s the BS these hucksters used to sell their snake oil.

In 2025, that “temporary” quarter-cent tax hike is supposed to disappear.  And no matter how Mr. Olivas tries to slice it and buffalo the public, any extension of a “temporary” tax hike that’s supposed to go away is a new tax HIKE.  Period.

Since the VOTERS voted for the TEMPORARY tax hike in 1998, the ONLY honest way to extend or make it permanent should be via ANOTHER vote of the people, not the seven members of the county commission.  Period.

If the Southern Nevada Water Authority, the Clark County Commission, the Las Vegas City Council, and any other “eternal life” government department, agency or bureau wants to extend or make permanent that “temporary” quarter-cent tax hike…put it on the ballot, make your case and let the people decide.