ROGER STONE EXCLUSIVE: Mueller Can Indict a Ham Sandwich But I’m Not Interested in Being His Lunch

ROGER STONE EXCLUSIVE: Mueller Can Indict a Ham Sandwich But I’m Not Interested in Being His Lunch
N&V Staff 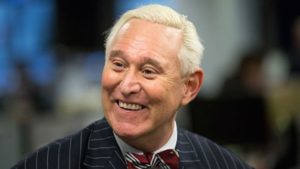 Both The Hill and CNN are now reporting that Special Counsel Robert Mueller is interrogating at least eight of my current and former associates and is asking questions about my personal life, my political activities, my pro-Trump activism, my book sales, my personal business and even my family relationships. Wait! I thought this was about Russian Collusion, WikiLeaks and the bogus claim that I had advance notice of the content, source and exact release date of the DNC emails which so rocked the 2016 Presidential race?

That the Special Counsel is now examining the minute details of my personal finances and taxes according to The Hill and CNN proves precisely my point; this is not about Russian Collusion or misdeeds in 2016, this is about fabricating any infraction in order to indict, silence and punish me for my support for Donald Trump.

This comes on the heels of a fake news assault in which the Wall Street Journal’s Shelby Holliday took exculpatory e-mail I provided her that fell outside the precisely worded scope of the House Intelligence Committee document request which confirms my claim that I never dealt directly with WikiLeaks or Assange but had a back-channel. My September request that this source find out if WikiLeaks had any information on the murder of Qadaffi is a legitimate journalist inquiry that the WSJ tries to make seem improper in some way.

Adam Schiff’s claim that I was obligated to turn this e-mail exchange over to the House Intel Committee and did not is false and if he could take a five-minute break from the television cameras he could read the wording of the Committee document request and would know this. This Shelby Holliday is the epitome of Fake News.

Having come up empty-handed in their attempt to find evidence or proof of Russian Collusion, trafficking in allegedly hacked emails with WikiLeaks or any advance notice of the publication of John Podesta’s emails, the Special Counsel is now clearly engaged in an effort to conjure up some other offense perhaps even mischaracterizing independent efforts that I took to successfully elect Donald Trump, at the same time sifting through my financial records, bank accounts and personal and family life.

I am mindful of the Alan Dershowitz claim that the average American inadvertently commits at least three felonies a day and I am facing an ad hoc federal prosecutorial juggernaut, with an unlimited budget and apparently no effective limitations on anything it does nor any subject matter or area of inquiry that it has not been broadly-empowered to aggressively scrutinizing, picking and probing through every molecule of my personal and professional life, deploying federal agents to conduct fine tooth microscopic review of my political and personal activities. Including badgering at least eight of my current or former associates.

I recognized Mr. Mueller could indict a ham sandwich but I’m not interested in being his lunch.

I recognized that this partisan witch hunt is very much driven by this fake news media outlets like MSNBC, CNBC, Huff Po, Slate, Salon, Vice, The Daily Beast and the despicable Raw Story engaged in a constant drum beat of misinformation in a relentless attempt to contradict what Anderson Cooper called “total consistency” in my claims about WikiLeaks and the 2016 election. These people scream for my blood on a daily basis. Now I know how the Christians felt in the Roman Coliseum when the crowd called for them to be fed to the lions.

In addition to badgering my associates about my finances they also seem focused on the most intimate aspects of my personal life, my business and personal relationships. Private detective services have confirmed that my cell phone and text messages are under surveillance and access to my email was obtained through an illegal FISA warrant that the New York Times reported I was subject to on January 20th of 2017. Surveillance without probable cause, hoping an offense can be confected.

The agenda of the Mueller inquisition is clear. It is to silence me as a critic of the partisan nature of their inquiry and the Gestapo tactics that they employ as well as their efforts to bankrupt me and punish me solely for the act of being for Donald Trump. It is also to issue a report that will serve for the basis for an impeachment drive in the increasingly unlikely event that the rabidly Democratic captures control of The House. The President must wake up to the true nature of the Mueller juggernaut which has been aided and abetted by the de facto Attorney General Rod Rosenstein. The President’s enemies’ enmity towards him is rank and their resolve to remove him should not be underestimated.

Politico has introduced a new potential goal of the Mueller team, which is to threaten to indict me unless I flip and testify against the President who has been my friend and who I have wanted to run for President for nearly thirty years. Although the New York Times has reported that President Trump is “afraid” of me, he has nothing to fear as I am his most loyal and steadfast supporter.