Rut-Roh! The Nevada Legislature is Now in Session…

Rut-Roh! The Nevada Legislature is Now in Session…
N&V Staff

With passage and signing of SB-143 – the gun control bill on background checks for private gun sales – now behind us, time to focus attention on other legislation now making its way through the Nevada Legislature…

SB-43 would allow unmanned traffic cameras to issue tickets to motorists, which have been outlawed in Nevada since 1999.  It’s probably the biggest of the Big Brother bills the Legislature will deal with this session.

AB-123 would require more detailed reporting from parents who choose not to immunize their children who attend public schools.  Current law only allows parents to opt-out if they provide written statements that such immunizations violate their religious beliefs.

Why only a “religious” objection?  Why can’t parents choose not to subject their kids to certain immunizations for MEDICAL concerns.  I’ve never cared much for such “religious”-only exemptions.

SB-159 would establish “sun exposure” policies in public schools related to wearing hats and putting on sunscreen when playing outside.

Good grief.  And they say 120 days isn’t enough time for a legislative session?

AB-187 is a Democrat-sponsored bill that would require kids 17 years of age or younger to wear a helmet while roller skating or riding a bike.  Failure to do so would result in a $15 fine for the parent or guardian.

This is truly stupid and another example of California-like Nanny State government gone wild.  And how is this going to be enforced?  As if our police officers don’t already have enough real “crimes” to worry about.

And even if parents buy helmets for their kids, how do you stop kids from being kids and choosing simply not to wear it at the playground when out of their parents’ sight?  This is nothing more than liberal feel-good legislation.

A new bill coming from the Commerce and Labor Committee would “make it illegal for an employer not to hire a person because the candidate tested positive for marijuana in a drug screening.”

Look, I supported legalizing marijuana.  However, if a PRIVATE employer doesn’t want to hire a marijuana user, what business is it of government?

MEANWHILE, BACK IN DC…

Once this “wall” thing is behind him, I hope President Trump tackles THAT national emergency.  Passing that debt onto our kids and grandkids is a true “immorality.”

Noting that “Ben Franklin, Andrew Carnegie and Thomas Edison started their careers at the age of 12 or 13,” a private school in Austin, Texas is focusing on fostering entrepreneurship for its students.

As columnist John Stossel points out, teachers at the school instruct students to “Try to start a business in one day.”

The founder of the school, Michael Strong, told Stossel: “I want students to go out there and get stuff done, fail, get up, try again.  That’s how we become creators, entrepreneurs.  We want them to do what they love, now.”

Strong describes traditional public schools as “13 years of how to be passive, dependent.”

He’s right, of course.  And the reality is there are no jobs without job creators, entrepreneurs.  Wish Nevada had a similar school.

JOY TO THE WORLD!

My eldest daughter, Kristen, got her first job last summer working as a tour guide at the dolphin exhibit at the Mirage Hotel.  Yesterday they gave her a chance to actually get in the water and swim with one of the dolphins.

Is this the look of a happy camper or what? 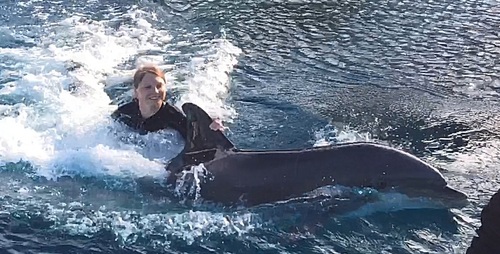 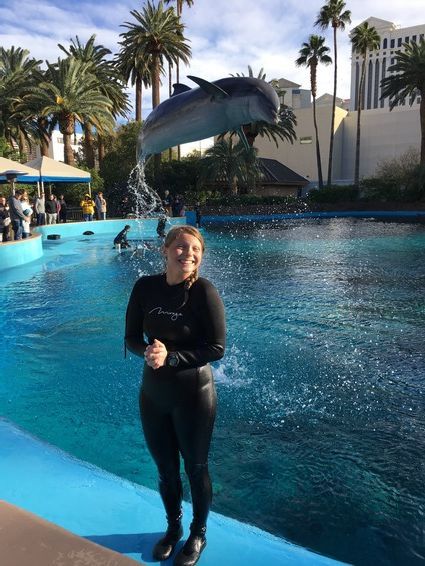 “If capitalism is evil and socialism is the answer, why isn’t the caravan heading for Venezuela?” – Charlie Kirk, TPUSA