(Chuck Muth) – One of the guys who I’ve learned the most from about copywriting and communications was a bona fide direct response marketing guru named Gary Halbert (RIP).  He was simply the BEST.

And one of Gary’s favorite ways to describe particularly insufferable human reprobates was: sh*t-weasel.  Always loved that term.

And if you add the descriptor “lying” in front of it, that’ll bring us to the Nevada Republican Party’s Director of Miscommunications, Keith “Schip-Wreck” Schipper.

When last visiting with Schip-Wreck here at Muth’s Truths, he was captain of the ham-handed communications team for the doomed 2018 SS Heller re-election effort.  Under his expert, “professional” guidance, Sen. Heller’s campaign was steered right into the rocks…and obliterated.

But in the Republican tradition of political consultants failing upwards, Schip-Wreck earlier this year was tapped to bring his particular talent for communications incompetence to the Nevada GOP. With the inevitable results.

Not only is this clown perhaps the least talented communications flak at this level that I’ve seen in over 25 years in this business, but he presents himself in public like some over-weight beach bum.

At least he doesn’t scare animals and small children by wearing a Speedo!  So there’s that.

I ran into Schip-Wreck earlier this week at an important town hall meeting of GOP party leaders in which various candidates running for state party officer positions made presentations. 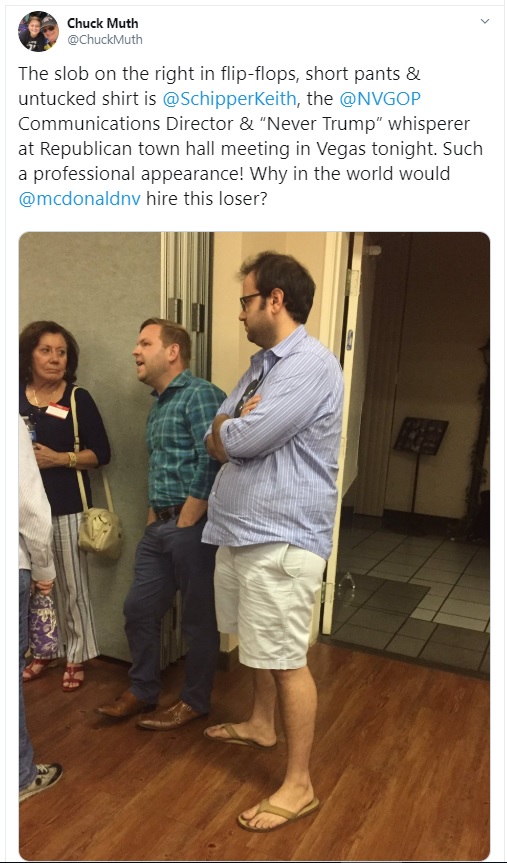 Anyway, one of the candidates for state party chairman who spoke at the meeting that night, Annie Black, posted a column yesterday morning criticizing Schip-Wreck’s miscommunications work on the Nevada GOP’s website.

She accurately pointed out that the website’s “News Release” page only featured one release dating all the way back to June 18th.  And that the release was actually nothing more than a re-print of a statement by the Republican NATIONAL Committee chair, not the NEVADA GOP chair.

Well, later in the day the Nevada GOP issued a news release on a subject Black had already weighed in on earlier in the day (follow the leader!).  To which Black tweeted…

“After publishing this morning’s AnnieGram slamming the @NVGOP’s sorry communications operation, they suddenly posted their first news release since June 18th – over two months ago! We get results.”

And Schip-Wreck had a veritable conniption over it! 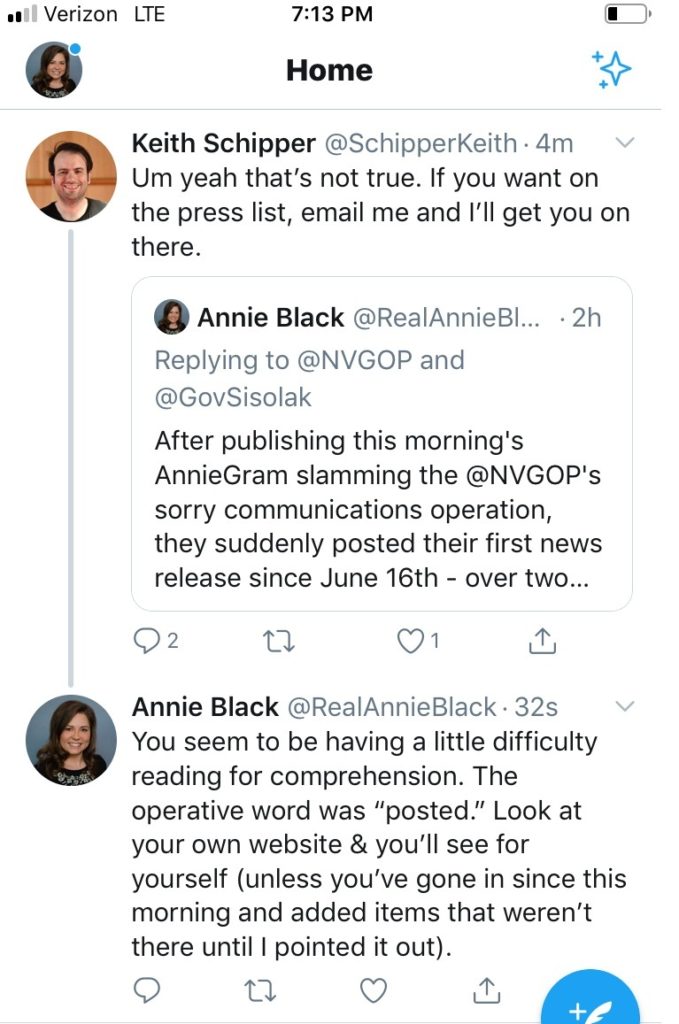 “Um yeah that’s not true,” Schip-Wreck tweeted back.  “If you want on the press list, email me and I’ll get you on there.”

To which Ms. Black replied…

“You seem to be having a little difficulty reading for comprehension. The operative word was ‘posted.’  Look at your own website & you’ll see for yourself (unless you’ve gone in since this morning and added items that weren’t there until I pointed it out).”

And Black was absolutely correct.

She even posted a screen shot of the Nevada GOP’s website showing the June 18th News Release and the new August 30th one, confirming that they were the ONLY two News Releases posted on the party’s website for the public to see… 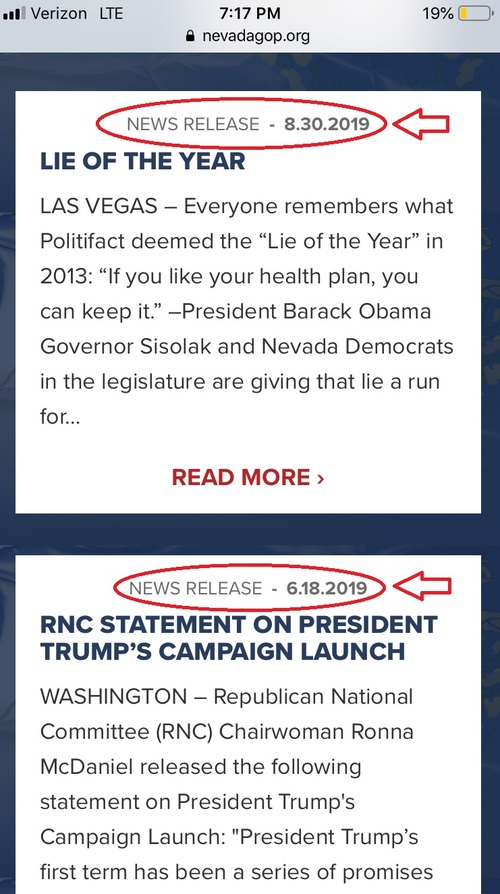 But Schip-Wreck, obviously ignorant of the First Rule of Holes (“Stop Digging!”), decided to double down with this rather condescending tweet in reply…

“Ms. Black, I’m guessing you hadn’t been to the @NVGOP’s website prior to announcing for chair, but we recently redesigned and overhauled it a couple weeks ago. The designer didn’t move all the press releases over as they were dated.”

Well, he certain put the little lady in her place, didn’t he?!!

Except for the fact that he’s a lying sh*t-weasel.  Here, I’ll prove it…

Black announced her run for chairman on August 16th.  Being generous, let’s say Schip-Wreck’s definition of a “couple weeks” goes back a full month, to August 1st, OK?

Now let’s hop into the Wayback Machine.  But first…

Apparently Mr. Schip-Wreck doesn’t know about the Wayback Machine.  It’s an online website archive application that can take you back in time and show you exactly what a given website looked like on certain dates in the past.

And according to the Wayback Machine, the new party website design was actually in place at least as early as June 19, 2019.

But hey, I’m in a generous mood this morning.

So let’s give Schip-Wreck the benefit of the doubt and concede that even though the website “redesign and overhaul” was done a couple MONTHS ago, not a couple WEEKS ago, maybe it’s true the “designer” did in fact fail to move the “News Release” content over in a timely fashion.

But remember, we’re dealing with a lying sh*t-weasel here.

And Schip-Wreck’s claim that “all the press releases” weren’t moved over because they were “dated” is pure sheep dip.

I present to the jury Exhibit #1.

On August 3rd, in one of the few tweets posted by the Nevada GOP (@NVGOP) prior to Ms. Black entering the race for chair, a News Release was highlighted featuring a statement issued by Nevada GOP Chairman Michael McDonald relating to the late-July Democrat presidential debates. 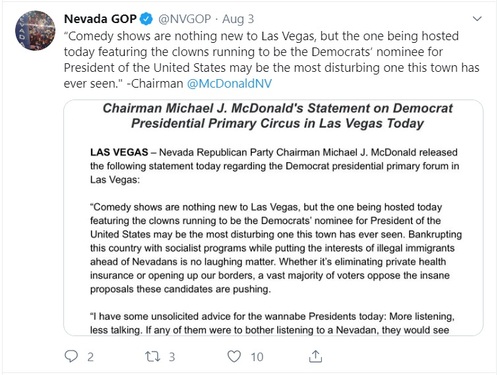 Sorry, Schip-Wreck, but August 3rd is decidedly NOT “dated.”  Especially considering the website designer had posted a News Release – its one and only one – dating back to June 18th (see previous graphic above).

Now, if a June 18th News Release wasn’t “dated,” how could an August 3rd news release be “dated”?

But hang on, we’re not done with this.

Let’s hop back into the Wayback Machine and travel through cyber-space to April 16, 2019.  That would be well past the midway point of the 2019 Nevada legislative session.

But before we get to that, we need to establish something else…when Schip-Wreck started heading up the Nevada GOP’s Miscommunications Department.

And according to the party’s FEC report, that was last January.  BEFORE the Nevada Legislature convened.

I now present to the jury Exhibit #2…

OK, let’s hop back into the Wayback Machine.

Which means there were no News Releases posted on the Nevada GOP website between January 1, 2019, when Schip-Wreck took the helm, and April 16, 2019 – midway through the legislative session.

That’s incompetence, if not malpractice, for a well-paid, supposedly “professional” communications director for a major state political party.

But hey, let me move beyond generous to magnanimous.

Maybe Schip-Wreck was busy watching the “March Madness” college basketball tournament during the session and just couldn’t find time to do that silly political stuff he was being paid for.

Maybe he hit his stride and started banging out and posting news releases left and right going after the crazy legislation being pushed forward by Democrats after April 16th.

And maybe all those News Releases after April 16th were considered “dated” by the new website designer and didn’t get moved over and posted.

But, um, if all those News Releases were considered “dated,” and therefore not moved over to the new website, then why, oh why, were the four “Carson City Updates,” dating back to May 12th, posted on the new website?

Then again, maybe Schip-Wreck’s flurry of News Releases were actually issued and posted between April 16th and May 12th in the missing archive window on the Wayback Machine.

And if you believe that, I have an investment in a Nigerian diamond mine I’d like you to consider!

Look, Republicans all across the state keep telling me the reason Nevada Republicans keep losing so many races is lousy messaging that stinks like yesterday’s diapers.

And considering this Schip-Wreck clown was the Miscommunications Director for Heller, and, unbelievably, now the Nevada GOP, we know why.

BTW: If I got any of this wrong, Schip-Wreck, please feel free to email me and try to correct the record.

But I might suggest you’d be better served learning and honoring the First Rule of Holes.

The Center SquareOctober 16, 2020
Read More
Scroll for more
Tap
Drive-By Muthings: August 30, 2019
What Our New State GOP Leadership Will Do