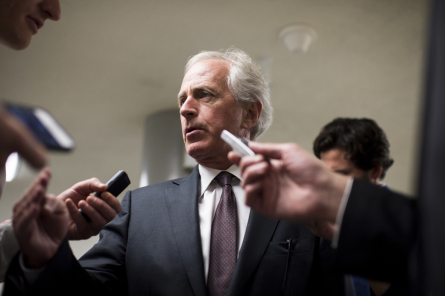 May 7: Sen. Bob Corker, R-Tenn., stops to speak with reporters as he heads to the Senate floor on Thursday, May 7, 2015. (Photo By Bill Clark/CQ Roll Call)

(Niels Lesniewski of Roll Call) – After a few false starts, the Senate passed bipartisan legislation to give Congress a say in a final international agreement with Iran on nuclear development.

The Senate voted, 98-1, to pass the measure as agreed upon by Foreign Relations Chairman Bob Corker, R-Tenn., and ranking member Benjamin L. Cardin, D-Md., after 93 senators voted to limit the debate, without addressing further amendments.

The bipartisan pair praised former Foreign Relations Chairman Robert Menendez, D-N.J., for his earlier leadership on developing the review legislation, but primarily looked ahead to what it might mean for the negotiations themselves and what may  be an acceptable outcome from the Senate’s point of view.

“The agreement must prevent Iran from having a break out capacity to produce a nuclear weapon in a long enough period of time that the inspection regimes will discover whether they’re in compliance,” with an ability to restore sanctions if need be, Cardin said.

“We know that what we need to do is now prep and get the committee and the American people, but also the rest of the Senate … up to scale as to what is important in this,” Corker said of the next challenge on the Iran issue as the debate moves back from process to substance, expressing concerns about the quality of the inspections.