Should W Think Roberts Was A “Damn Fool Mistake”?

(Fred Weinberg) – George W. Bush may well go down as one of the most decent human beings ever to serve as President, so it is not surprising that he hasn’t said anything negative about Chief Justice John Roberts. 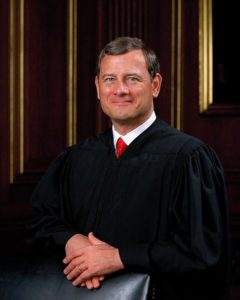 But, after Roberts twisted himself into a legal pretzel first to uphold Obamacare and most recently to try and deny the Trump administration its absolute right to ask a question about citizenship on the 2020 census, you have to wonder what W might be quietly thinking.

Dwight Eisenhower had this to say about his appointment of former Chief Justice Earl Warren, “The biggest damn fool mistake I ever made.”

Harry Truman appointed Tom C. Clark to the Court.  “It isn’t so much that he’s a bad man, it’s just that he’s such a dumb son of a bitch.”

Roberts needs to stop worrying about his legacy and just pay attention to the damn law.

From a purely practical standpoint, you do not need a JD from Harvard to know that any administration can add a question about citizenship to the decennial census without the Court’s blessing.  The constitution mandates the count, it is used to apportion congressional districts and only citizens can vote.

Even though the left has its collective panties in a twist over the current President and his attitude towards illegal aliens the constitution is not changed.

To suggest that the Secretary of Commerce’s “rationale” for adding a question which has appeared on every census until 1950 is just silly.  A more pertinent issue for the Court is why the question has NOT included since then.

On what planet is a government not allowed to count residents by citizenship?

The problem Roberts has is that he seems to think his role as Chief Justice comes with a commission to be loved by both sides of any issue.

That is clearly at odds with what he told the Senate Judiciary Committee in 2005 at his confirmation hearing.

“Judges and justices are servants of the law, not the other way around. Judges are like umpires. Umpires don’t make the rules; they apply them.  The role of an umpire and a judge is critical. They make sure everybody plays by the rules.  But it is a limited role. Nobody ever went to a ball game to see the umpire.”

Apparently Roberts has evolved in his role as an umpire.

His vote on the census question wasn’t a ball or a strike.  If anything, it was a foul ball with two strikes.  That is, nothing.  Another pitch.  But baseball doesn’t have a clock to run out and Roberts knew damn well that the census has a clock.

Roberts’ call was more like the referee in that game seven of the 2019 Vegas Golden Knights vs. the San Jose Sharks series which changed the direction of that game and caused the National Hockey League Board of Governors to actually change the rule in the off season.

And it may well be that George W. Bush’s “biggest damn fool mistake” will turn out to be John Roberts.

Fortunately, this President appears up to the challenge and he is looking for a way around the ridicules ruling the court made.

Which might mean Roberts will get this issue jammed up where his moon doesn’t shine very shortly.

Watching him twist and turn will be like watching a Christian Scientist with appendicitis.

Ron KnechtOctober 23, 2021
Read More
Scroll for more
Tap
Fiddler on the Roof: It’s about Fathers and Daughters
What Part of ILLEGAL Alien Do They Not Understand