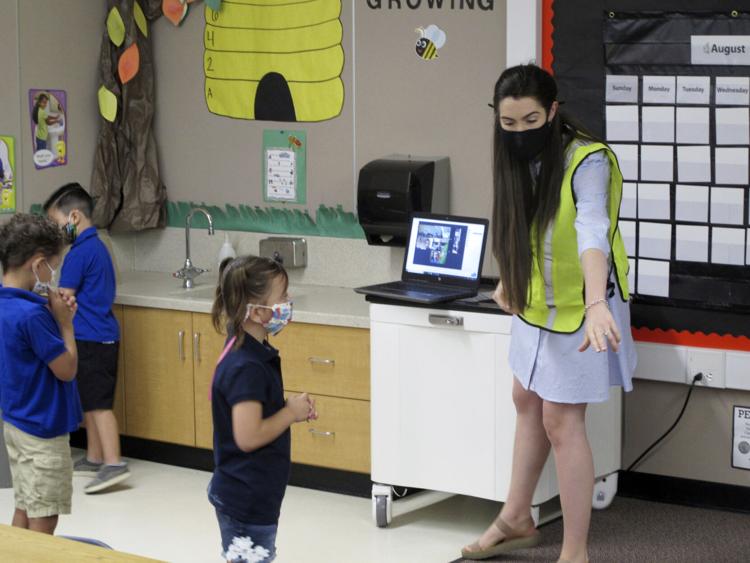 In this Aug. 18, 2020 file photo, first-grade teacher Annamarie Bezick talks to her new students in class with others connected in the laptop in the background upon their return to Greenbrae Elementary School in Sparks, Nev., for the first time since March.
Scott Sonner / AP Photo

(Robert Davis) – Nevada Gov. Steve Sisolak signed a bill on Monday that waives the state’s accountability requirements for public schools for the remainder of this school year.

Federal law requires states to submit a plan demonstrating that its curriculum meets the “challenging state academic standards” as adopted by U.S. Department of Education (DOE). Furthermore, states are required to prove that their students are proficient in certain subjects through standardized testing.

SB83 removes the requirement for Nevada’s State Board of Education (BOE) to report standardized test scores to the DOE. State law requires the board of trustees of a school district and the governing body of a charter school to compile this data each year.

However, state law also requires BOE to take action if there was an “irregularity in testing administration … in the manner intended by the person or entity that created the examination or assessment,” according to the statute.

The bill’s legislative digest says this statute complies with the waiver that BOE is requesting from the federal government.

Meanwhile, Senate Bill 173, also known as the Back on Track Act, would provide summer schooling for students across the state who suffered learning loss from distance learning.

Senate Bill 215 would allow local education agencies to flexibly schedule the upcoming school year. State law requires schools districts to offer 180 days of instruction, or an equal number of minutes. The bill would also allow districts to reduce the school year by no more than 15 days.

The legislation’s efficacy is contingent on the DOE approving the plan, according to the bill’s text.

DOE recently approved a similar plan in nearby Colorado.