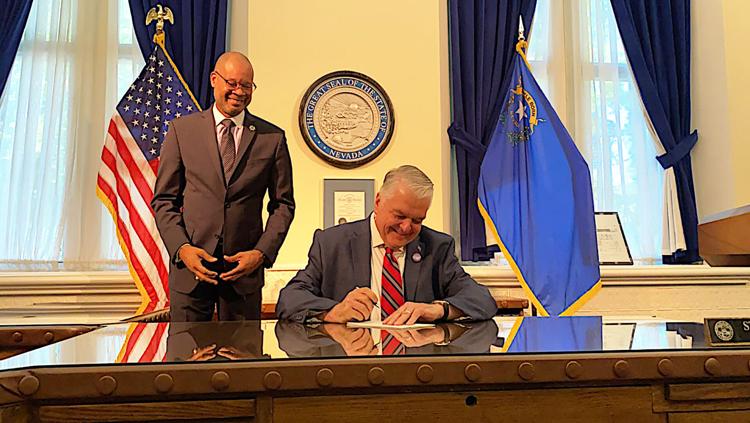 (Robert Davis) – On the anniversary of the killing of George Floyd, Nevada Gov. Steve Sisolak signed two bills on Tuesday that aiming to clarify the government’s role in civil rights investigations and ban the use of no-knock warrants by local police.

Assembly Bill 58 authorizes the state attorney general to investigate whether any governmental authority – including people acting on behalf of the authority – has deprived people of their constitutional rights while carrying out their duties.

Attorney General Aaron Ford said the measure was necessary because the U.S. Department of Justice (DOJ) ceased conducting such investigations in 2017. The bill will allow his office to undertake the investigations regardless of DOJ’s stance, according to Ford.

If any patterns or practices are discovered during the investigation, the bill requires the AG to file a civil action to “eliminate” the act in certain circumstances, according to the bill’s text.

It also requires the state Department of Justice to cooperate with its federal counterpart in all investigations that are similar in nature. The bill was sponsored by Ford’s office.

“Today, we are taking a step forward in honoring George Floyd and Breonna Taylor’s memories by taking action to address historic and long-stemming injustices in our country,” Sisolak said in a statement. “Nevadans deserve to feel safe in their own homes and communities and it’s critical that they trust that those charged with protecting them do so with integrity.”

In order to obtain a no-knock warrant, petitioners need to prove there is imminent public danger, that the suspect is a serious flight risk, and describe why the raid cannot occur during the daytime, according to the bill’s text.

It also requires police officers who participate in no-knock raids to go through additional “tactical or dynamic entry operations” training before joining the squad. The tactical teams must also wear body-worn cameras “when possible,” Sisolak added.