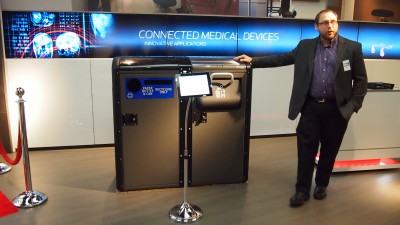 Big Belly Solar trash cans – the wave of the future!

A recent article by Kristin Musulin of WasteDive.com talked about consumer “smart” trash cans that were introduced at this year’s Consumer Electronics Show (CES) in Las Vegas.

“Whirlpool announced the Zera Food Recycler,” Musulin reported, “an in-home bin that can turn a week’s worth of food scraps into fertilizer, as reported by Waste Today. The appliance works with ‘a simple push of a button’ and can be remotely operated through a mobile app.”

The “Zera Food Recycler,” Musulin continued, “will not only keep organic materials out of the landfill, but will also offer a composting solution to consumers who are not offered organics collection through their hauler.”

On the commercial side, I visited the Verizon Wireless Innovation center in San Francisco while attending a post-election conference back in November.  There I learned a new term: IoT (Internet of Things).  And one of the “things” was Big Belly Solar trash cans, which “help municipalities reduce costs and track waste and recycling through wireless technology.”

“Solar panels on top of the Big Belly Solar trash receptacles produce energy to compact trash as items are placed in the container,” Verizon explains. “This means the city doesn’t have to collect trash as often.”

“The solar-powered trash compacters,” Verizon continues, “have helped the city of Greensboro make better decisions for routing and collection, which leads to saved time, money, even a reduced carbon footprint.”

Now the reason I bring this up is an issue I wrote about just before Christmas.  Republic Services, which has a guaranteed monopoly on residential and commercial trash collection in Las Vegas, is asking the city to extend its current contract for an additional 15 years…five years before the current contract expires.

WITH NO COMPETITIVE BIDDING!

In light of how quickly technology is changing our lives on a daily basis, that’s insane.

By all accounts, Republic Services has done an excellent job for a reasonable cost in Southern Nevada for the decades in which it’s had an exclusive, monopoly contract.  But things simply aren’t the way they used to be – not just thirty years ago, but THREE years ago.

And it’s not like there aren’t competitors out there.  According to GridWaste.com, there are “over 20,000 waste companies in the U.S.” – including, in the top five, Waste Management, Republic Services, Clean Harbors, Stericycle and Progressive Waste Solutions.

If Republic wants a 15-year extension on its trash collection monopoly 5 years early, then the contract should be opened to competitive bidding by any and/or all of the other waste companies in the country.

Because of its history of operations in Southern Nevada, Republic Services will have a tremendous advantage in such a process even though it’s not a Nevada company (they’re based in Phoenix).

But it would be irresponsible – if not a violation of their fiduciary duty to the citizens of Las Vegas – for the city council not to at least see what alternatives might be out there, especially with technology changing so fast.

In the last election, the people of Nevada voted overwhelmingly, 72-28 percent, to break open the monopoly NV Energy has had for decades over electricity.  Consumer choice – including in long-standing and well-established industries such as taxicab and hotel – is the new coin of the realm in public policy.

Las Vegas should recognize this titanic shift in society and stop doing what it’s always done simply because that’s the way they’ve always done it.  And if they can’t bring themselves to open this contract for competitive bidding, then maybe it should be put on the ballot and let the people themselves decide – the same way they did with electricity deregulation.

And may the best smart trash can win!