This month, California Governor Jerry “Moonbeam” Brown signed probably the most restrictive water consumption law in the country.  Under the new statute, starting in 2022 every California man, woman and child will be restricted to 55 gallons of water use per day.  For a family of four, that’s 220 gallons per day. 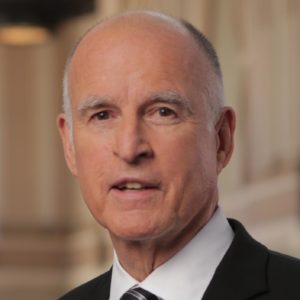 The penalties for using more water than your allocation under this newest socialist Democrat program?  Between $1,000 and $10,000 per day.

We know California has a water problem, stemming especially from the large agricultural regions of the state and their great irrigation requirements. The state’s nearly 40 million people also use a lot of water.

Enforcement?  Apparently there will be “water police” reviewing ratepayers’ daily metered use.  They’ll report violations to users’ water utility companies, which will be assessed the fines.  The water utilities will pass on those costs one way or another.  Spreading them across all ratepayers evenly would raise a firestorm, so they will surely be charged to the offending parties.

There will be some exemptions, allowing for private swimming pools and the like.  But why?  If you are going to restrict people to 55 gallons of water use per day, which is basically enough to take one very brief shower and run one load of laundry, why would swimming pools even be allowed for private citizens anymore?

That seems to be completely contrary to what Moonbeam and the Beautiful People seek to accomplish — unless they are hoping that people with private swimming pools will use them for bathing to stay within their water limitations.

Why stop at restricting the private citizens’ water use this way?  There are many other opportunities to reduce overall water use in the state.

Eliminate golf courses, which require a flood of water.  It may keep former President Obama and President Trump out of your state, but is that really a problem for the good people of the Golden State?  Those two can play golf in Florida or Hawaii!

Uhm, shower with a friend?

Why not just outlaw farming?  California agriculture uses much more water than all the people who live there combined.  This would save all the water needed.  Of course, it may be hard to put food on the table, but whatever.  According to Moonbeam and his posse, water must be conserved at all costs.

Levy fines against restaurants that serve water to their patrons.

Mandate landscaping that does not use any water.  Say goodbye to grass in California, unless, of course, it is the type you smoke.

Speaking of grass, California could eliminate the entire marijuana industry in the state and stop all that water usage.  The wine making industry as well.

Make sure you have plenty of water cops at all the reservoirs in case some crafty citizens try to supplement their water supply by filling large containers right at the source.  And make sure there are plenty of state police to throw those lawbreakers in jail for the crime of getting a little more water for their family.

Rename Grass Valley to Xeriscape Valley, since there will be no more grass without water.

Our advice?  If you believe in freedom, get out!  You have until 2022 before this law goes into full effect, providing you four years to formulate a plan to leave California and move somewhere that still believes in freedom and individual liberties.

But please, if you think this continued march toward progressive nirvana is a good thing, do not depart.  Stay there.  We don’t want any more Democrat socialists invading Nevada.  We don’t want your sanctuary state loving, water restricting, methane taxing, drinking-straw withholding brand of foolishness any more than we want your earthquakes.  Also, we can do without your traffic snarls, overpriced everything, water rationing, tax increases, trigger warnings and safe spaces.

Most of us in the Silver State have no desire to become East California.