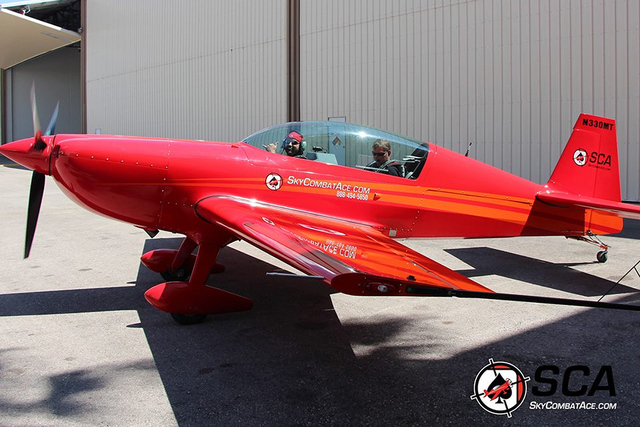 Pilot Ben Soyars at the driver’s seat and an unidentified person inside one of Sky Combat Ace planes last August 2015. Pilot Soyars and Steve Peterson were reported dead in an air combat crash, April 30, this year. (Courtesy: Las Vegas Review-Journal)

A group of 12 men, including the two casualties, had planned to take air-to-air combat flights. But with weather conditions mitigating their plan and strictly adhering to the company’s refund policy, only nine of them took flights run in three Sky Combat Ace stunt planes.

The three planes simultaneously flew through the air, taking turns of the air combat manuever: two planes exhibit air-to-air combat maneuver while the other plane observes.

After the group completed the aerial activity, two planes were able to return and land at Henderson airport, leaving behind the other plane. The company launched a search plane and discovered the crash from an altitude of approximately 800 feet above a hilltop 12 miles south from the airport.

Medical report shows the two died of blunt trauma injuries. Further investigation is yet to be done by the National Transportation Safety Board to find out an analysis and the probable cause of the incident. Preliminary report, however, suggested visual flight conditions.

N&V StaffMarch 8, 2017
Read More
Scroll for more
Tap
Monorail to use interest money to kick-start expansion to Mandalay Bay
TSA Barking And Snapping At Us Like Poorly Trained Pit Bulls