The death of “Mount Reagan” 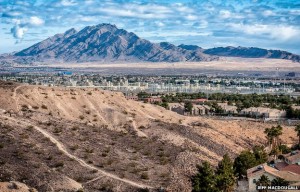 In order to name a natural feature after someone, there are two ways to go about it: Citizens may submit a naming proposal to the Board on Geographic Names or Members of Congress can introduce a bill. And because Congress is so special, any naming proposal it puts forward takes precedence over any proposal put forward by citizens.

As you probably know, we’ve been actively pursuing establishing an official Mt. Reagan in Nevada since 2010, and submitted a formal proposal to the Nevada Board on Geographic Names in Reno to name the unnamed peak at the top of Frenchman Mountain to the east of Las Vegas this past January.

We had our first formal hearing last May at the board’s meeting in Dayton and made a full presentation on the merits of our proposal, including email and paper petitions in support of the proposal, as well as extensive information documenting Reagan’s worthiness for such an honor. We also addressed objections to the naming proposal submitted by Democrat Clark County Commissioner Chris Giunchigliani.

Our second hearing was on September 10th in Reno. At that meeting, we were advised that a liberal online petition campaign had been launched that weekend and that the board chairwoman had received a hundred or so template emails of opposition. The board considered and discussed the email opposition campaign but nevertheless approved “Mt. Reagan” by a vote of 5-2.

At that point, the Nevada board’s recommendation was submitted to the national Board on Geographic Names in Washington, DC for final action and possible official approval. We were halfway there…and prospects, with the Nevada’s board’s OK, looked good.

So on Wednesday, Paul Smith – a supporter of the project from Massachusetts who has hiked to the top of “Mt. Reagan” and attended and testified at all of the Nevada hearings – arranged for the two of us to meet with the director of the Reagan Presidential Foundation at the Reagan Library in Simi Valley, CA to brief her on the status of the project as it moved to the national level.

It was a great, positive meeting…and a wonderful experience seeing the Library again, despite a very dark development the night before.

You see, in light of the meeting with the Reagan Library folks, I had shot an email the day before inquiring on the status of the national board’s agenda to see if our proposal had been scheduled for consideration yet. The email I received from the Nevada board’s chairwoman in response dropped me like a brick…

“Chuck, we have learned that there is a competing name proposal for the same peak on Frenchman Mountain. Please check out > https://www.govtrack.us/congress/bills/113/hr3440

“We were not aware of this bill when I sent in the statement from the NV Board and, when learning about it, was not sure if this was the same peak/point on Frenchman’s Mountain but the US Board has just informed us that it is. The bill takes priority over a nomination coming through a state board.

“You are likely as stunned as we are; this is the first situation like this I have seen in my several decades on the NV Board. I understand that the US Board must now suspend any further action on your proposal pending outcome of the bill. You could contact the US Board for any further information as this is beyond our jurisdiction.”

Indeed, on October 30, 2013 – seven weeks after the Nevada Board on Geographic Names approved our proposal to name the peak on top of Frenchman Mountain “Mount Reagan” and forwarded the state recommendation to the national board – Rep. Dina Titus (D-Nevada) submitted a competing proposal in Congress to name the same peak “Maude Frazier Mountain,” which essentially kills our citizen proposal through the administrative process.

The national board’s hands are now tied and they can do absolutely nothing on our Mt. Reagan proposal as long as Titus’ bill is before Congress.

Don’t get me wrong. I’m not saying Frazier – who you likely have never heard of – isn’t deserving of being honored, especially as the state’s first woman lieutenant governor. But she should get her own mountain or other natural feature; not the one the Nevada Board on Geographic Names already approved for President Reagan!

This cheap shot is as petty, partisan and politically vindictive as you’ll ever see. She didn’t even have the courtesy and decency to tell us about the stunt she was pulling.

Make no mistake, no one, including Rep. Titus, had any interest in this mountain peak until we suggested it as an honor for President Reagan. You and I did the hard work, followed the process and played by the rules. And look where that got us.

Yeah, I’m pretty ticked off. But I’m not throwing in the towel.

I have a conference call scheduled for Monday morning with some of the folks in DC who have been extremely supportive of this project since Day One. I’ll keep you posted on our plans.