The Right Stuff: We Need A Lot More Of It Now

The Right Stuff: We Need A Lot More Of It Now
N&V Staff 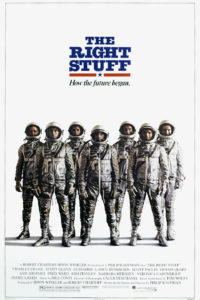 (Ron Knecht & Geoffrey Lawrence) – When we’ve had enough of politics and politicians, we need a good fun exhilarating movie like The Right Stuff.  After a long hard week, take Saturday evening to watch this rollicking 1983 classic with great casting, script, directing, settings, performances, action, music, editing, and themes. Plus hot planes and some explosions.

There are many great aspects of the film, but we want to note one we find profoundly appealing. Something the world needs these days.

Sure, it’s about glory, macho, cool, heroism, humor, dark and light, etc.  But an important perhaps overlooked message is that a key part of having the right stuff is that real men pay quiet respect to their peers, predecessors, and successors.  You’re not really in the club without acknowledging the right stuff when you see it in others.

America’s space program was fueled by high tech and big bucks and built on rigorous testing, vetting, selection and training of our finest.  It was high profile, media-centered and glamorous.

But Tom Wolfe, the author of the 1979 book, and Phillip Kaufman, the screenwriter and director, draw a direct line from the hard-scrabble roots of brave, resourceful, determined, under-paid cowboy and hotdog test pilots at Edwards Air Force base in the eastern California desert after World War II to the epic exploits of astronauts in the Soaring Sixties.

The earlier generation is best represented by test pilot Chuck Yeager, the first man to break the sound barrier.  When another pilot demands $150,000 to challenge the barrier in the new X-1 rocket plane, Yeager agrees to try for free, saying the Air Force already pays him.  How much?  Two hundred eighty-three dollars per month.  He wants in for the adventure.

The evening before his historic flight, he breaks some ribs while horsing around.  Thus injured, the next morning he’s unable to close the latch on the canopy of the plane.  Jack Ridley, his side-kick, saws about 16 inches off a broomstick and Yeager is able to close the latch with the stick.  Everything about the early days was that down to earth.

Eventually, two future astronauts, Gus Grissom and Gordo Cooper, become his neighbors on the base. Despite their initial braggadocio, they learn some lessons of respect before being chosen to be among the first seven astronauts.

When Grissom’s capsule sinks in the sea after he exits it on splashdown, some guys back in California disdainfully say the astronauts aren’t real pilots, just passengers on a craft controlled by ground crew. Indeed, a chimpanzee was the passenger on an early launch before any manned flight.

But Yeager sets things right with express respect for his successors.  He notes that the chimp that flew had no idea about the dangers involved, but the astronauts know them very well.  “It takes a special kind of man to volunteer for a suicide mission, especially when it’s on national TV,” he says.  “Ol’ Gus, he’s done okay.”

The movie chronicles the rest of the Mercury space program, leading to the flight of Cooper, the youngest and last of the seven and, while charming, the biggest hot dog of all.  He becomes known for asking folks, “Who’s the best pilot you ever saw?”  Then, with a big grin, before they can answer, he says, “You’re looking at him.”

When the press interviews him before his flight, that kind of cheese is exactly what they want to spice up their coverage, and so they ask him.  But in that moment of truth, he also rises to the occasion, even though he knows what they want.

He says he’s seen a lot of great ones, brave men going up every day in hurtling pieces of machinery to push out the envelope of speed and altitude and hauling it all back in.  …  But, obviously now thinking of Yeager, he says, there was one guy who embodied the right stuff perhaps more than any other …

And even though the press goads him into cracking his usual joke, it’s clear that he has paid in his own mind and heart the respect due to his predecessors and peers.

We could use more of that mutual respect these days.  And more films like The Right Stuff.