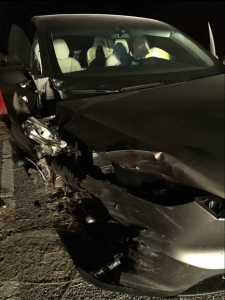 (Fred Lambert, Electrek) Ever since the very publicized fatal Florida accident in a Model S while the Autopilot was activated, Tesla’s semi-autonomous driver assist system has been getting its reputation tarnished in the media. Autopilot took blame for a few subsequent incidents, despite nothing currently pointing to the system being the cause of any of the accidents – though NHTSA is now probing the Autopilot over two of them.

Now we learn of yet another crash where the Autopilot was reportedly at play. A Tesla Model X crashed in Montana Saturday night resulting in the SUV driving through a guardrail and going off the road. The driver blames the Autopilot but Tesla has yet to chime in…

Based on the pictures of the aftermath, the vehicle appears to be totaled with the front passenger side being completely torn off, including the wheel, but fortunately, both occupants are reportedly OK.

After the accident, a friend of the driver took to the Tesla Motors Club forum to share pictures of the aftermath and relay the driver’s story:
Click here to continue reading