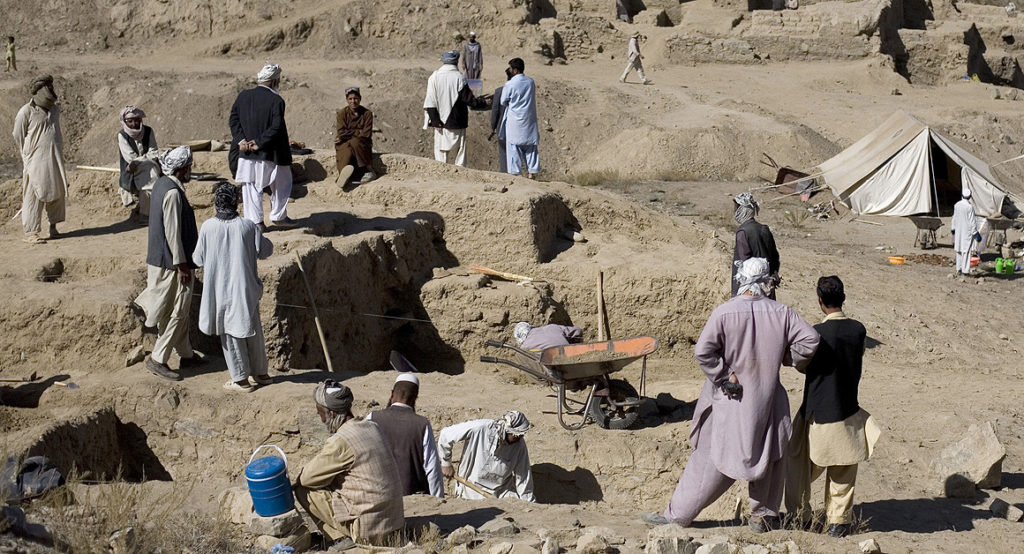 Men work on the excavation of a sprawling 2,600-year-old Buddhist monastery in Mes Aynak, south of Kabul, Afghanistan, on Oct. 12, 2010. (Courtesy: Associated Press)

(Michael Crowley, Politico) – When Donald Trump said in late January that America should have “kept the oil” after invading Iraq — “To the victor go the spoils,” he declared — foreign governments were horrified.

But one country is now actively promoting its natural resources to win Trump’s attention for its desperate cause: Afghanistan. The government, led by President Ashraf Ghani, has pitched Trump on its vast mineral reserves in an effort to keep the new president invested in the country’s fate.

Afghanistan’s improbable investment pitch is a sign of a new Trump-era mindset, in which foreign leaders are selling their nations in more explicitly economic terms than ever before.

Afghan officials say Trump, a veteran deal-maker, appears to be listening. “This is the first administration that is focused on Afghanistan’s economic potential, and we welcome that,” said Hamdullah Mohib, Afghanistan’s ambassador to Washington.

In a Dec. 3 phone call, Trump and Ghani discussed Afghanistan’s mineral wealth, whose value a Pentagon study has estimated at up to $1 trillion. An official Afghan readout of the call said that Trump told Ghani the U.S. wants to help Afghanistan develop its “tremendous natural resources.”

Perhaps the most notable of Afghanistan’s buried treasures are its large quantities of lithium, a silvery, soft metal crucial to laptop and cellphone batteries that’s sometimes called the oil of the future. A 2010 Pentagon memo concluded that Afghanistan could one day become “the Saudi Arabia of lithium.”