In the second part of our look at the top ten races Nevada conservatives should have on their radar screens in 2020 (click here for Part I), we’re gonna take a look at six key legislative races where the GOP has a shot to pick up some Dem seats.

Republicans are on the short end of the stick in the Senate by 13-8.  If they lose one more, they’ll be in a SUPER-minority – which would mean the Democrats could raise taxes without getting a single GOP vote.

Democrats have two longshots at picking up that seat they need; however, Republicans have a better chance at flipping two Democrat seats.  They are…

Carrie Buck is an absolute dream candidate for this race.  Click here to read her story.

Carrie came withing a whisker of defeating the former incumbent in this district in 2016 in a bad year for Republicans.  She’ll be going up against a Democrat carpet-bagger, Kristee Watson.

Watson was last seen getting crushed in a state assembly race in 2018 in a district that’s not even in SD5.  Definite pick-up opportunity.  The key for Carrie will be fundraising and a much-better campaign communications operation.

Republicans have recruited an A-List candidate for this race: April Becker.  But this is a D-majority district and Cannizzaro is the Senate Majority Leader.  Tough sledding.

Race is gonna cost both candidates a small fortune, but Becker’s deep family ties to the GOP donor universe should make her competitive against the incumbent’s special interest donors.

Neither Senate GOP candidate has signed the Taxpayer Protection Pledge yet.

In the Assembly, Republicans have real shots at picking up four seats…if they don’t blow it.

This district has been held in the past by former Assemblyman Richard McArthur, a solid conservative who’s running again.

However, Richard has always had trouble with fundraising (he reported raising only $250 for all of last year) and his loss in 2018 proves just running a door-to-door campaign ain’t gonna cut it in this day and age.

But first Richard will have to beat a Republican new-comer, Donnie Gibson, in the primary…and that’s gonna be tough.  Donnie is “wired in” with the local community and raised over $115,000 last year.  Darned impressive.

Even if Richard finds some chinks in Gibson’s armor, without the dough to make voters aware of them he’s gonna get swamped.

While the district has a D advantage, it’s been held by a Republican in the past.  And GOP newcomer Steven DeLisle raised over $134,000 last year while Cohen raised only $16,000 and has less than $50K in the bank.

So this seat is definitely in play for a potential GOP pickup.

This is the only Assembly district in the state with a Republican majority and a Democrat incumbent.  But the Republican Assembly Caucus continues to blow off conservative former Assemblywoman Jill Dickman.

If you’re not familiar with how badly GOP caucus leaders have fouled up this golden opportunity, click here.

In light of the screw-job the caucus tried to do on her, Jill still hasn’t decided whether to run again as a Republican or as an independent.

If the people running the caucus were smart (I know, an oxymoron) they’d be on bended knee BEGGING her to run with their full endorsement.  Then they could turn their time and attention to other races.

Instead, like Diogenes the Cynic, they’re wandering around the sunlit streets of Reno, lantern in hand, looking for an unknown, untested alternative.  Stupid is as stupid does.

Republicans held this seat until 2018 when incumbent Jim Marchant failed to hold it.  Now two GOP candidates are vying to take it back.

The no-doubt-about-it candidate for conservatives is Andy Matthews.

Matthews is the former head honcho for Nevada’s only conservative think tank, Nevada Policy Research Institute, who raised an eye-popping $154,000 last year.  He’s run for office before and managed a statewide campaign before.  So he’s not only a proven, rock-solid conservative, but battle tested, as well.

He’s being challenged by a former TV personality, Michelle Mortensen.  And while Mortensen talks a good conservative game, there’s ample reason for conservatives to be suspicious.

Let me first take you back to that disastrous 2015 legislative session.  Gov. SandRINOval was pushing for his monster tax hike, but 13 conservatives in the Assembly could have stopped it, thanks to the 2/3 super-majority requirement for tax hikes.

And we had the 13 out of 25 needed…until Assemblyman John Hambrick shivved the conservatives in the caucus, switched sides and joined the tax hikers in return for being named Speaker – a job worth about 30 pieces of silver.

He then removed conservative Assemblywoman Michele Fiore as Chairwoman of the Taxation Committee and replaced her with a little tax-hiking RINO.  Had Fiore remained as chair, Sandoval’s tax hike never would have seen the light of day in the Assembly, let alone pass.

Now, it might be an exaggeration to rank Hambrick’s sellout up there with Judas and Benedict Arnold, but not by much.  And guess who HE’S supporting in the AD37 race?

Yep, Mortensen.  In fact, she proudly posted this shot of the two of them on her Twitter feed on Monday… 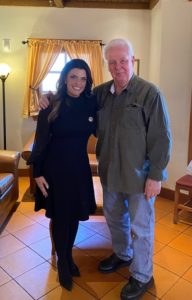 A picture’s worth a thousand words, right?  And this one pretty much says it all.

But now comes the rest of the story…

Apparently, the Republican Assembly Caucus took a vote on who, if anyone, to endorse in this race.  And Hambrick had been telling people he was supporting Andy.

Then came time for the vote.

Now, the way they vote is for each member of the caucus to text the name of the person they wanted to endorse to the executive director of the caucus.  But John screwed up and texted EVERYBODY his pick.

Once a two-faced, double-talking, stab-you-in-the-back politician…

The Big Nevada Losers of the Biden Blowout

Here’s what DC political strategist Rich Galen wrote on Tuesday in his post-Nevada caucus edition of his most excellent blog, Mullings.com …

“My favorite Conservative strategist in Nevada, Chuck Muth, told me in advance of the voting [in the Nevada caucus] that the word on the street was that the ABB (Anybody But Bernie) establishment was SBB (Solidly Behind Biden).”

They’re all still busy trying to wipe the egg from their faces.

By the way, my voluntary Leap Year subscription drive is still going.  Some donors are reporting that after making their contribution to Citizen Outreach they felt they could run faster than a speeding bullet and leap tall buildings in a single bound!

If you wanna get in on that action…