Trump Rises to the Occasion

Trump Rises to the Occasion
Ron Knecht
Rising above the persistent political turmoil and smallness of Democrats and the mainstream media, President Donald Trump Tuesday delivered a memorable State of the Union speech. 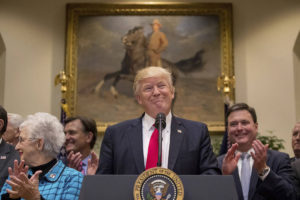 06
Forget the incessant whining and complaining of CNN, et al. that followed.  Let’s focus on what he said.
He began by noting our “unlimited potential” as a country, and he told legislators he is ready to work with them to realize it: “We must govern not as two parties but as one nation.”  So, from the start, he focused on the most important thing, especially in view of the nastiness and pettiness of politics this decade: America’s potential.  And how to achieve it by working together.
Visionary and conciliatory.  The ideal way to start in these troubled times.
He began by noting two great anniversaries that remind us of our unlimited potential and what we have done in the past when we worked together.  First, he saluted three World War II veterans who participated in the 1944 D-Day landing in Europe to rescue the world from the fascist and socialist Axis powers.  That drew a huge, enthusiastic standing ovation.  Inspiring.
The second event was the 50th anniversary of the Apollo 11 landing on the moon.  He introduced lunar module pilot Buzz Aldrin and promised that this year Americans will be going back to space in American rockets.
Next, he directly appealed for compromise to promote the common good and break decades of political stalemate.  “Tonight, I ask you to choose to make America great.”
His main theme was a plain-spoken and clear list of specific issues and policies.  He noted that, despite the problems of the last decade, we have a strong economy on which to build.  Unemployment is at its lowest in 50 years, with record low figures for African, Asian and Hispanic Americans.  And five million Americans lifted off food stamps in recent years.  Later, he noted 58 percent of last year’s newly created jobs went to women.
He pointed to the growth-inducing tax cuts and regulatory reforms that are major achievements of his administration.  He noted we have become the world’s leading producers of oil and gas and a net exporter of oil for the first time in 65 years.
“The state of the union is strong. … Our country is vibrant.”  That’s as true as we make it.
He asked senators to confirm 300 qualified needed nominees the Democrats have held in limbo.
He praised the ground-breaking criminal justice reform First Step Act the administration and congress passed by working together.  He recognized two good people who benefitted from it.
Then he turned to the many burdens of illegal immigration, saying providing safety and security to Americans from the minority of dangerous illegal aliens is a moral issue.  He recognized the heirs of the Jerry and Sherri David of Reno, recently murdered by an illegal alien.  He celebrated the legal immigrants who enrich our nation and strengthen our society and challenged congress to act on the issue in the next ten days.
Mr. Trump saluted the brave men and women of the Immigration and Customs Enforcement bureau and promised walls and see-through steel barriers will be built where they are needed.  What he rightly called a common-sense solution.
Although I have reservations about his tariff wars, he extended an olive branch to China in this regard and offered other constructive trade initiatives.
Promising efforts to lower the cost of health care and protect people with pre-existing conditions, he again reached out to the Democrats.
Recognizing the needs for real solutions in education, he promised school choice for American children.  He challenged us to build a culture that cherishes and protects innocent life.  He noted foreign affairs progress, especially in Venezuela.  And he promised, “America will never be a socialist country.”
In the end, he returned to the D-Day heroes, noting one of them later helped liberate the Dachau concentration camp, including a survivor seated next to him.  He denounced the vile poison of anti-Semitism and celebrated moving our Israel embassy to Jerusalem.
He closed by again inviting the Democrats to work in bi-partisan cooperation with Republicans and his administration so our most thrilling achievements are still ahead.  Just right.
Prev postNext post
Related Items
Nevada
Ron Knecht