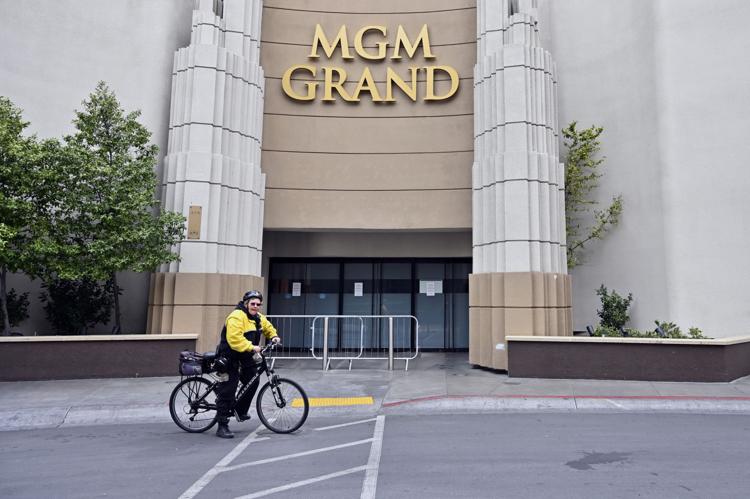 A security guard patrols the now closed MGM Grand hotel-casino after all the casinos and non-essential businesses in the state were ordered to shut down due to the coronavirus Wednesday, March 18, 2020, in Las Vegas.
AP Photo/David Becker

(Bethany Blankley) – The Security, Police and Fire Professionals of America (SPFPA) union will pay thousands of dollars in dues refunds to 24 security guards in Nevada who filed a claim with the federal Labor Relations Board.

Las Vegas security guard Justin Stephens and roughly two-dozen coworkers won a settlement against the SPFPA, after they filed a complaint with free legal aid from National Right to Work Legal Defense Foundation (NRWLF). The guards allege the union took dues from their paychecks and refused to accept their request to resign from the union within the allotted time period, actions their attorneys argued violate provisions of the National Labor Relations Board Act.

The unions are required as part of the settlement to refund more than $4,200 to 24 security guards, including Stephens. The settlement also requires SPFPA officials to process any timely resignations by employees and to notify North American Security to stop deducting dues from those whose resignations have already processed.

“It’s good news that Mr. Stephens and his hard working colleagues have gotten back dues that were illegally taken from them by SPFPA union bosses who have demonstrated they are more interested in stuffing their coffers with union dues than respecting the wishes of the rank-and-file workers they claim to ‘represent,’” National Right to Work Foundation President Mark Mix said in a statement. “This type of legal trickery used by union bosses to stay in power even over the objections of most workers shows why the NLRB should eliminate the numerous policies that block workers from voting out or otherwise removing an unwanted union.”

In January, Stephens and his colleagues sent letters requesting to resign their union membership within the allotted time frame and asked that dues deductions from their paychecks cease. The union rejected their requests, continued collecting dues, and extended its bargaining agreement with the guards’ employer, the complaint states.

According to the complaint filed at Region 28 of the National Labor Relations Board-Phoenix branch, SPFPA officials extended the bargaining contract with Stephens’ employer, North American Security, on January 31, 2020, one day after Stephens and many of his colleagues sent their union resignation letters.

The letters were sent before the contract between North American Security and the SPFPA was set to expire on March 31. They had a three-month period to lawfully end dues deductions.

The state of Nevada has enacted Right to Work protections, which prohibit unions from requiring anyone from joining a union or paying dues or fees as a condition of employment.

SPFPA officials continued to collect full union dues “from all non-member bargaining unit employees,” the claim states, which violates the National Labor Relations Act. The claim also states that unions’ move to extend its bargaining contract after the security guards notified the union amounted to “an apparent attempt to avoid a decertification” vote to remove the union.

“Ultimately, the root of this problem is the federal labor law which grants union bosses monopoly bargaining powers, allowing them to force their so-called ‘representation’ on individual workers who don’t want it and believe they would be better off without it,” Mix adds.

The SPFPA maintains that security police officer professionals “win better wages, benefits and a voice on the job,” earning roughly 28% more than nonunion workers, and “are more likely to receive health care and pension benefits than those without a union.”