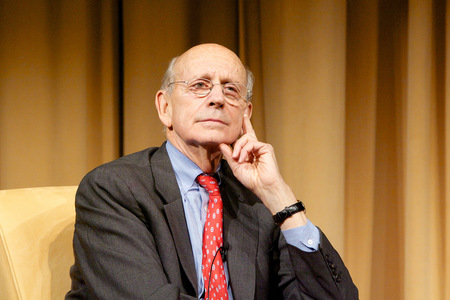 U.S. Supreme Court justices suggested they may give states broader latitude to purge their voting databases of people who might have moved, as the court heard arguments Wednesday in an Ohio case that could shape who gets to cast ballots in the November election.

Justice Stephen Breyer hinted he might join his more conservative colleagues in voting to uphold an Ohio system that uses non-voting as a factor in deciding which people to remove from the rolls. Breyer questioned whether states have enough other tools to purge people who have moved away or died in far-away places.

“What are they supposed to do?” he asked. “Is Rhode Island supposed to look at the Tasmanian voting records or hospital records?”

Justice Anthony Kennedy, often the court’s swing vote, said states are aiming to “protect the voter roll from people that have moved.” Two other Republican appointees, Justices Clarence Thomas and Neil Gorsuch, asked no questions during the hour-long session, leaving some uncertainty about the ultimate outcome.

The case has become a proxy for the highly partisan fight over the country’s election rules. Republicans are calling for stepped-up efforts to prevent voter fraud, while Democrats say those moves are a thinly veiled campaign to stop liberals and minorities from casting ballots.

Nineteen states use voter inactivity in the process of purging their databases, though only a handful make non-voting as central as Ohio does. Rules in Georgia, Tennessee, West Virginia, Oklahoma and Pennsylvania are among those that could be affected by the case.

Under the disputed procedure, Ohio mails notices to people who haven’t voted in two years, asking them to confirm that they still live at that address. If someone doesn’t respond and then doesn’t vote during the next four years, the state removes the person.

An Ohio voter and two interest groups say the procedure violates the 1993 National Voter Registration Act, more commonly known as the Motor Voter law. The challengers point to a provision in the federal law that bars states from removing anyone “by reason of the person’s failure to vote.”

The lawyer for the challengers, Paul Smith, said about 70 percent of the people who received notices in 2011 simply threw them away and didn’t return them to the elections office.

“And when you don’t get the notice back, what that tells you is absolutely nothing about whether the person has moved,” Smith said.

“It doesn’t tell them nothing,” he said. “It tells them that they did not respond to a notice that says you’re going to lose the registration if you don’t vote through the two years, two elections.”

Smith said 20 percent of people sent back the forms, and the Post Office returned 10 percent as undeliverable.

Ohio Solicitor Eric Murphy said Congress had adopted a “compromise” that “left a lot of room for states in our federal system to adopt the procedures that are best in that state.”

Justice Sonia Sotomayor said the Ohio procedure would have a disproportionate impact on racial minorities and homeless people and was part of a broader movement that has reduced turnout in parts of the state.

“Places like Cleveland have very, very, very long lines of voters trying to vote,” she said. “All of these impediments result in large numbers of people not voting in certain spots in the state.”

Sotomayor also said people have a “right not to vote.” That idea drew pushback from Roberts, who suggested the U.S. might benefit from a law like the one in Australia requiring people to vote.

The challengers say officials have far better tools to identify voters who have moved. States can use change-of-address forms filed with the U.S. Postal Service, as well as government tax records, census lists and motor-vehicle department databases, the challengers say.

Ohio has a separate procedure for removing people who file change-of-address forms with the Postal Service.

Breyer aimed all of his questions at Smith, the challengers’ lawyer. The justice said the case might come down to an “empirical question” about exactly what happens when the notices are mailed.

“There might be surveys about how many people throw everything in the wastebasket,” Breyer said. “I confess to doing that sometimes.”

The Trump administration is supporting Ohio, saying the Motor Voter law requires states to adequately notify nonvoters before they are purged but doesn’t prohibit the use of voting history altogether.

A divided federal appeals court blocked the Ohio procedure and let about 7,500 state residents cast ballots in 2016, even though they’d previously been struck from the list of eligible voters.

The case, which the court will decide by June, is Husted v. A. Philip Randolph Institute, 16-980.