Will Republican lawmakers ridicule this budget proposal, too?

Will Republican lawmakers ridicule this budget proposal, too?
N&V Staff

(Thomas Mitchell) – When Dan Schwartz had the temerity to suggest the state would not sink into chaos if its general fund budget was increased by merely 4.6 percent instead of the governor’s proposed 12.3 percent, he was ridiculed and shouted at. Not enough detail he was told.

Now Assembly Majority Whip Jim Wheeler, state Controller Ron Knecht, and a few other conservative Republicans have presented their “Balanced Plan for Growth: A Budget for the New Nevada,” an alternative to Gov. Brian Sandoval’s $1.3 billion increase in general fund spending and taxes.

Knecht said the plan spends almost all of what Sandoval wants on education, but eliminates the need for the business license fee/margin tax and allows “sunset” taxes to actually sunset.

The plan still calls for spending $6.92 billion, which is more than the $6.3 billion that the Economic Forum forecast will be available to spend under current tax law.

Wheeler and Knecht explain how their budget reaches some of that extra spending:

“Holds employer contributions to employee pensions constant at current rates and requires all employees to contribute to their ownretirements. It redirects $334 million in projected savings from this measure as a revenue source for public education.” 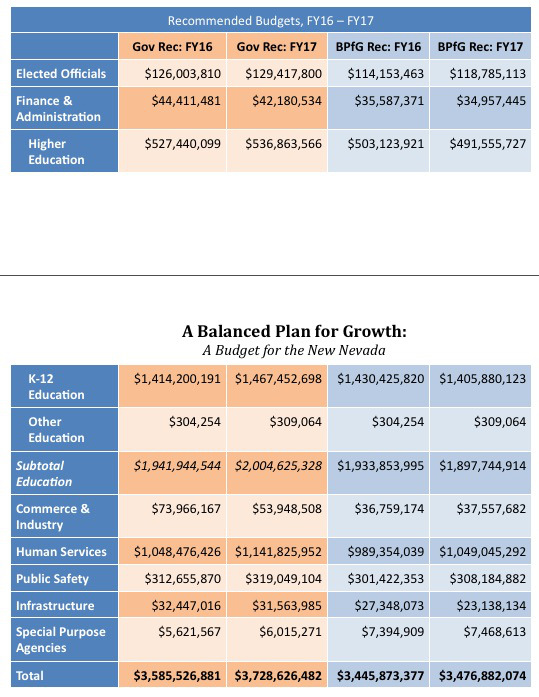