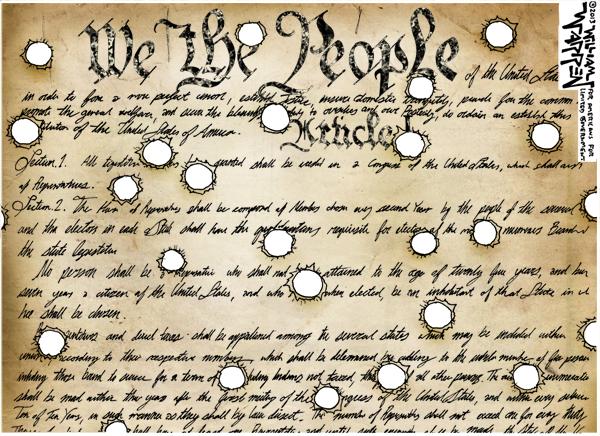 (Rick Manning, NetRightDaily.com) – “I would just say on principle that the success of our democracy depends on rule of law. And there is no public official that is above the law, certainly not the president of the United States. But neither is the Rowan County clerk. That’s a principle that is enshrined in our Constitution and in our democracy and its one obviously the courts are seeking to uphold. ”

That was White House Press Secretary Josh Earnest speaking on Sept. 3, 2015 about the arrest of Rowan County Clerk Kim Davis of Kentucky for refusing to process gay marriage licenses.

The rule of law is fundamental to our nation’s existence, and it has been destroyed over the past seven years both by the Obama administration and federal courts with acquiescence from desperate-to-be-loved Congressional leadership.

On the very day Josh Earnest had the audacity to utter these words, a mid-level government IT worker at the State Department announced that he would invoke his Fifth Amendment rights related to the email server of his former boss, Hillary Clinton.

The President’s Attorney General for more than six years, Eric Holder, remains in contempt of Congress for his refusal to turn over documents related to his Department’s “Fast and Furious” gun running operation. Holder was never forced from office and continues to roam free. Eric Holder has been, and remains, above the law.

The President’s IRS engaged in political targeting of conservative groups and auditing conservative donors in one of the most dangerous abuses of executive branch power in our nation’s history, and the perpetrator faces no federal charges and continues to draw payments from the federal government. Lois Lerner has been, and continues to be, above the law.

The attorney general of Kentucky, Jack Conway, refused to do his job in defending the Commonwealth’s one man/one woman laws and received plaudits from the media and the governor. His decision cost the taxpayers more than $200,000 in outside legal fees, and no one jailed or forced him to resign. Jack Conway was above the law.

The City of San Francisco and other cities have a so-called “sanctuary city” policy and refuse to cooperate with federal officials in enforcing the nation’s immigration laws resulting in heinous crime after heinous crime being perpetrated by the protected. The mayors of these cities have been deemed above the law.

The Obama administration invoked executive amnesty for illegals even though the President himself said on a number of occasions that he could not legally do it. Yet, no one stopped him.  President Obama is clearly above the law.

Eric Holder chose not to do his job and defend the Defense of Marriage Act in court, failing to perform his constitutional duties. Once again, Eric Holder was above the law.

The examples of government officials taking action or inaction that violated their oaths and the laws of the land are myriad.

Yet, the Clerk of Rowan County, Kentucky refused to issue any marriage licenses due to her personal religious beliefs. Now, this elected Democratic official finds herself in jail at the hands of a federal judge.

The point is not whether one local elected official should have complied with a federal court edict, but rather how we are now living in post-constitutional America. A place where Twitter mobs demand justice, their political masters provide it, and the concept of blind justice has been obliterated.

A place where Iraq War hero David Petraeus is charged with and pleads guilty to mishandling secret data because he left his calendar on his bed where his mistress could see it while he was CIA director. A CIA director who refused to allow his agency to take the fall for the Obama administration’s false narrative on Benghazi, and who found himself smeared in the media and charged shortly thereafter.

While at the same time, the Secretary of State was running all of her classified emails through a non-government server in direct contravention of the law. Petraeus is disgraced, Hillary is running for President.

A nation of laws indeed.

Welcome to post-constitutional America where the political potentate in power enforces the law against whomever he or she wants, with the threat to all others to follow or else.