As we begin to close out 2017 and move into the next election year, it’s time for a sneak-peak at the roster of candidates lining up for Nevada’s four congressional districts.

CD-1:  Democrat incumbent Rep. Dina Titus is a lock for re-election in this gerrymandered Democrat-for-life district.  Some Republican(s) will run against her, as usual, but haven’t got a prayer.

CD-2:  Republican incumbent Rep. Mark Amodei is a lock for re-election in this gerrymandered Republican-for-life district.  His only possible vulnerability would be to a credible conservative challenge in a GOP primary.  But unless he uncharacteristically throws President Trump under the bus, it ain’t gonna happen.

CD-4:  Democrat incumbent Rep. Ruben Kihuen is the poster boy for “empty suit.”  There’s no there there.  The Invisible Man has more substance.  But Rubey is protected by a Democrat voter registration advantage that will be extremely difficult to overcome short of another “red wave” like in 2014.  Unlikely in this political environment.

But should such an electoral tsunami develop, the candidate most likely to fill Bill Buckley’s “most conservative candidate who can win” maxim is moderate Republican Las Vegas City Councilman Stavros Anthony, despite some rather strange notions as to the proper role of government when it comes to small businesses in a free market.

Now to CD-3, which Democrat incumbent Rep. Jacky Rosen – with her “extensive” congressional experience of less than a single year – is vacating for a shot at the U.S. Senate brass ring.

The likely Democrat candidate is going to be socialite Susie Lee.  The Republican field is far more muddled.

There’s former Clark County GOP Chairman Dave McKeon, an establishment shill with more personal baggage than a Samsonite outlet store and whose only real political claim to fame is a father who was once a Congressman in California who almost no one in Nevada has ever heard of.

There’s Nevada State Sen. Scott Hammond – a nicer man in politics you’ll never find.  But that’s the problem.  Nice guys usually finish last in the rough-and-tumble of a congressional race.  And he’ll be further burdened in a GOP primary by the fact that he voted for the largest tax hike in state history during the 2015 legislative session.

Out of the public eye and behind closed doors “Queen Vick” is often abrasive to the point of obnoxious and constantly portrays herself as the “true conservative” in the race who keeps her promises.

But the inescapable fact remains that despite signing the Taxpayer Protection Pledge promising to “oppose and vote against any and all efforts to increase taxes,” Seaman broke that promise NINE times in the 2015 session.  Good luck excusing that.

The new kid on the block is former Channel 8 (Las Vegas) consumer advocate Michelle Mortensen, who gives every indication of being an unapologetic rock-solid conservative true believer – including naming her daughter after Ronald Reagan!

She’s cheerful, articulate, well-informed on the issues, knows from first-hand experience how to deal with the media and isn’t afraid to throw a punch.  If Mortensen can raise enough money to be competitive in this four-way primary she has an excellent chance to pull off an upset against her three experienced political opponents.

Ladies and gentlemen, start your engines!

How to Irritate a Liberal

A lot of people ask me, “Hey, Chuck, how can *I* irritate liberals like you do?”

Well, thanks to a suggestion from my little bro’ Greg back in Baltimore, here’s a simple, quick way to get under the skin of left-wing snowflakes every time you go to the store…

On the back of your $20 bills, write the words “President Trump Lives Here” with a Sharpie including an arrow pointing to the image of the White House you’ll find there. (Yes, you CAN write on currency) 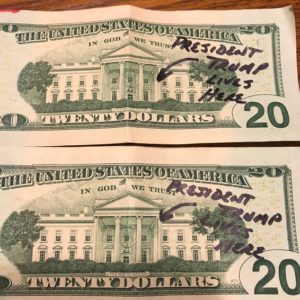 Fun for the whole family, especially for those of you crazy enough to shop on Black Friday.  Irritate away!

“President Donald Trump’s near-endorsement of Alabama Republican Roy Moore followed days of behind-the-scenes talks in which he vented about Moore’s accusers and expressed skepticism about their accounts.

“During animated conversations with senior Republicans and White House aides, the president said he doubted the stories presented by Moore’s accusers and questioned why they were emerging now, just weeks before the election, according to two White House advisers and two other people familiar with the talks. …

“Trump gave personal approval for White House counselor Kellyanne Conway to go after Moore’s Democratic opponent, former U.S. Attorney Doug Jones, during a Monday interview on ‘Fox and Friends,’ which the president regularly watches, said one person with direct knowledge of the decision. Conway laced into Jones, saying that Alabama voters shouldn’t be ‘fooled’ by him and hinted that the White House wanted Moore’s vote on tax reform.” – Morning Score, 11/22/17