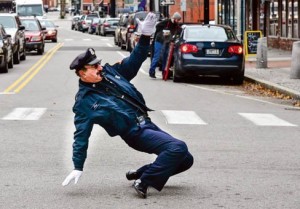 According to the Boston Globe, back in October the retired Lepore led a protest against the local Dunkin’ Donuts after a 17-year-old black woman “wrote #blacklivesmatter on a paper coffee cup she served to an on-duty patrolman.”

In response, “An outraged Lepore announced to his 4,000-plus Facebook followers he was boycotting Dunkin Donuts, and criticized Black Lives Matter for promoting violence against police officers.”

That, in turn sparked an uproar in the local black community, leading to Providence public safety commissioner Steven M. Pare announcing late last month that he was pulling the plug on Lepore’s holiday dancing duties.

Lepore has since closed his Facebook page, but “vows to dance on.”

“I’m no longer a police officer,” he told the Globe, “I’m a performer.” Catch some of his act below…