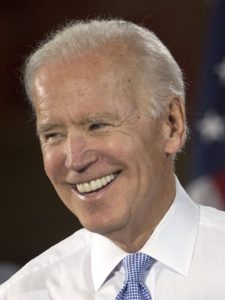 Coming in third (and on the rise) is a very wealthy white woman, Elizabeth “Pocahontas” Warren – although she does reportedly have 1/1024th Native American in her.

The Democrats relentlessly sell themselves as the party of inclusion.

Unless, it appears, you’re running for president.  Then all bets (and Beto’s) are off.

Where Are the Nevada GOP Endorsements?

As noted previously, the Nevada Republican Central Committee (NRCC) decided two weekends ago to endorse and nominate Donald Trump as the GOP’s presidential candidate five months before the caucus.

The argument is that Trump is an incumbent who is clearly the strongest Republican candidate for the 2020 general election.

So why hasn’t the Nevada GOP endorsed Amodei for 2020 yet?  Seems awfully hypocritical in light of what they did for Trump.

The conservative Nevada Policy Research Institute on Tuesday released its own ratings of the 2019 Nevada legislative session.

I like the NPRI ratings because they don’t cherry-pick just a dozen bills to score and focus mainly on economic issues.  This year the organization looked at 57 bills, all of which received floor votes – as opposed to voice votes where legislators can lie and say they voted for or against something even if they didn’t.

The two most conservative Assembly Republicans: Assemblyman John Ellison (92.55) and Assembly Minority Leader Robin Titus (90.50).  Only four others scored in the 80’s.

All of whom were already on my Primary Bait Menu based on last week’s ratings by the American Conservative Union (ACU).  None of them have to vote so badly to hold their Republican-majority districts.

This is darned near a political obscenity.

What is wrong with these people?

Of the three, only Goicoechea is up for re-election in 2020.  I wish conservative donors would pull their money and build a treasure chest big enough to entice Assemblyman Ellison to run a primary against him!

And as predicted, Heller’s right back to slamming President Trump.

“I don’t think he was the beginning of the problem, but he has exacerbated the problem we have in Washington D.C.,” opined Heller.

And as the Las Vegas Review-Journal noted, Trump said Heller “lost his reelection last fall because he was hostile to Trump in 2016 and did not excite the conservative voter base.”

The domain name itself would have you thinking it’s the official website of the Clark County Republican Party.  It’s not.  And don’t think it’s accidental or unintentional.

Whose site is it?  No idea.  There’s no contact information other than a webform.  No name, no address, no phone number, no email address.  No nothing.  It’s a scam.

Which is a shame because, as I noted, the content on the site is very good – except where they list Shannon Bilbray-Axelrod as a Republican candidate for Assembly District 34.  She’s not. She’s a Democrat.

I know.  My daughter and I just went horseback riding with her and her daughter last weekend at our mutual friend Ronni Council’s (most excellent!) wedding at Zion National Park.

Look, if they have to hide the identity of the people behind the site, you have to wonder about other hidden agendas which may be tied to it.  For example, the group recently sent out an email reading: “ClarkCountyRepublicans.org endorses Kathy Njus for District F Trustee.”

Again, deceptively making it look like the official party organization has endorsed her. Why?  What game are they playing?

Come out, come out, whoever you are.  You have a good site.  But a little truth in advertising would be appropriate and welcome.

It’s pretty much a done deal as to who the Republican candidate is going to be next year for Clark County Commission District C: Las Vegas City Councilman Stavros Anthony.

He’s got a who’s-who list of Host Committee members for his September 25 campaign kickoff fundraiser.  But word on the street is that Ross Miller – Son of a Guv and former Nevada secretary of state – is throwing his hat in the ring.

And the guy is a tough, polished and experienced campaigner.

Remember, it’s the best campaign that wins elections, not necessarily the best candidate.  I hope Stavros’ campaign team is up to the challenge.  But there’s considerable concern in that department among a number of GOP insiders.