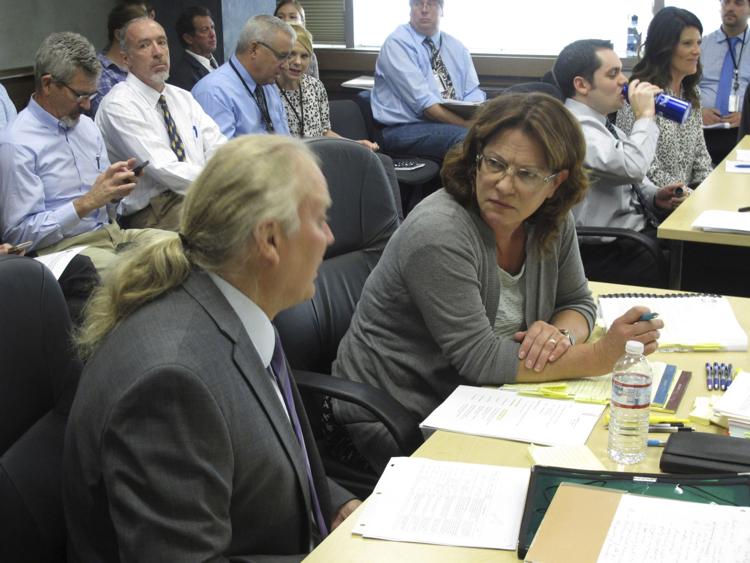 John Hadder, left, executive director of the Great Basin Resource Watch, talks with his group’s lawyer, Julie Cavanaugh-Bill, on Wednesday, Sept. 4, 2019 in Carson City, Nev., before the Nevada Environmental Commission denied their appeal seeking to rescind a state water permit for a huge open pit mine. They say the molybdenum mine about 250 miles east of Reno could pollute the ground water for centuries.
AP Photo/Scott Sonner

Great Basin Resource Watch, which filed the appeal, implored the state panel to discontinue the permit for a molybdenum mine that Eureka Moly, LLC, a subsidiary of Denver-based General Moly Inc. is seeking to dig on Mount Hope near Eureka about 250 miles east of Reno.

The commissioners upheld the permit on a 3-0 vote last week following hours of testimony.

Experts for the Reno environmental group testified at the panel meeting last Wednesday that the permit was based on faulty calculations that dramatically underestimate the amount of contamination that will flow into the mile-wide pit when mining operations finish and it begins to fill with water.

“The Mt. Hope Mine Project would be one of the largest open pit mines in the nation,” said Great Basin Resource Watch Director John Hadder.

Hadder added that “Mt. Hope and its environs will be obliterated if this project goes forward as planned, and given the inadequate environmental analysis, long-term impacts to the land and water could deliver a significant blow to the nearby ranching and farming community.”

Molybdenum is a metal used in the production of stainless steel as well as numerous applications in the oil, gas and energy sectors. It is also used to make key automotive and aircraft parts such as engines, crankshafts and jet engine components.

“We would have liked to see the mine permit revoked by the State Environmental Commission, since we still view the permit as based on faulty analysis,” Hadder said, noting that there was “good deliberation amongst the three person panel, who were clearly conflicted.”

Hadder noted that the panel ended up recognizing the overarching problems that were raised regarding water waste in pit lakes, and the potential for hundreds of years of water pollution at the mine.

“Despite the decision, we see opportunities for reform. GBRW is still considering whether to go to district court on the state permit, and the possibility of federal court on the yet to be issued new permit from the BLM,” Hadder said.

Great Basin Resource Watch, along with other environmental groups, has been fighting in federal court since 2012 to block the planned mine which would cover about 12 square miles.

According to Eureka Moly’s website, the mine is expected to last at least 30 years but there is no start date for operations to commence.

Scientists with the Nevada Department of Environmental Protection (DEP), who recommended approval of the original permit last year, said there was no threat to the state’s groundwater.

Christine Olson, an environmental scientist for the agency’s Bureau of Mining, Regulation and Reclamation told the Associated Press that the mine does not “pose any threat to degrading groundwater.”

According to an Associated Press report, the SEC commissioners said they were “torn” with the decision to uphold the mine’s permit but that they were deferring to their own experts in Nevada’s DEP who determined there would be no threat to the groundwater.

A spokesperson for Eureka Moly supported the panel’s decision.

Rogers said the BMRR decision was based in part on extensive rock characterization and analyses, hydrological evaluations and a state-of-the-art geochemical model.

“These studies demonstrate that the Mt. Hope mine will not adversely affect water quality. The Mt. Hope facilities are designed to meet or exceed Nevada requirements, and Eureka Moly is committed to develop and operate the Mt. Hope mine to the highest safety and environmental standards,” Rogers said.

Rogers added that the company welcomes review of designs, and has “always been willing to sit down with GBRW and/or other stakeholders to explain and discuss any aspect of our plans.”

She also noted that the studies that went into the permitting effort were “necessarily technical and complex, so it’s understandable that GBRW may not have the expertise to adequately assess them.”

“Nevada’s mine regulatory program is considered the best in the world, and BMRR is to be commended for the diligence and expertise they applied to their technical review,” she said.