Phase II of Operation Caucus Chaos – starting a “Democrats for Trump” group – might just be catching on.  Got this email from one of my Muth’s Truths subscribers yesterday…

Added another reader from Reno…

“A bunch of us did this four years ago.  And I never switched back – which has been both rewarding and informative.  I now get all kinds of emails, texts, robocalls, et. al. from the new communist (aka democratic) party.  You can entertain yourself for hours answering texts, emails and robocalls.”

“Loved your e-mail today and count me in for who to support on the Dem side and the temporary re-registration.  I did the same thing in 2008 in a state where we could temporarily choose our party affiliation when we voted in a real primary, not a caucus.”

Hmm, something tells me this could become a much bigger tribe (no offense, Mrs. Warren) than the “fake news” media would have you believe.  Indeed, meet Lill Fiore… 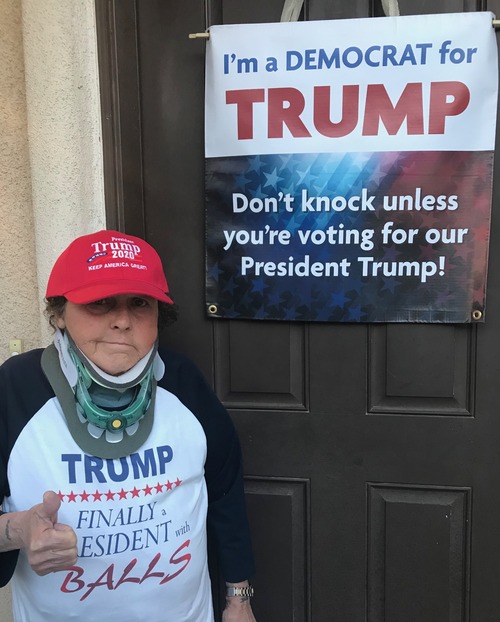 Lill is a lifetime Democrat.  51 years.

And if you can’t see the photo of Lill I’ve attached, she decided to hang a big sign on her front door to welcome campaign door-knockers.  It reads…

“I’m a DEMOCRAT for TRUMP.  Don’t knock unless you’re voting for our President Trump!”

And in case you’re wondering, yes…

I think we may have found our official spokesperson!

I just wrapped up an interview with my friend Rich Galen about the Nevada caucus.  Rich is a longtime DC political strategist and former head of GOPAC – from back in the days when Newt Gingrich was Speaker.

He’s also a brilliant writer and sharp humorist.  Here’s a Nevada-specific example from his blog post on Monday…

“Nevada is pronounced ‘Nev-AD-a’ not ‘Nev-AH-da.’  I gave a speech to the state party once and pronounced it incorrectly.  They literally booed me, and several threw dinner rolls at me.  It was like I was a batter on the Houston Astros facing Dodger pitching.”

Check out his blog at https://mullings.com/

Anyway, Rich and I go way back – and he’s graciously come out to Nev-AD-a a number of times to speak at our Conservative Leadership Conference.  Always a crowd-pleaser.

He and I were both early adopters of the Internet (thanks again, Al Gore!) for the purpose of political communications and started our two e-newsletters right around the same time in the mid-90s.

We also share the same revenue model for our publications:  FREE.

So, no…neither of us can afford to go to one of Pete ButterEdge’s wine cave fundraisers.

Instead of charging a monthly or annual subscription fee, we just send out occasional VOLUNTARY donation requests.  Any amount.  $5 bucks, great.  $5,000…BETTER!

I haven’t done a voluntary subscription drive in quite a while, but on Monday I got this very nice email from Donna P…

Well, they don’t call me Mr. Helpful for nuthin’!

And with this being a leap year, I figured I could get an extra day of tin-cupping if I start now and run a subscription drive through the end of the month.

If you find them interesting, sometimes entertaining and often informative.

If you enjoy irritating the left, as well as the “fake news” media (but I repeat myself).

Please help us keep the lights on, the laptops humming and the typewriter ribbons fresh.

And if those aren’t good enough reasons, I’ve heard that donating to Citizen Outreach…

You’ll be glad you did!