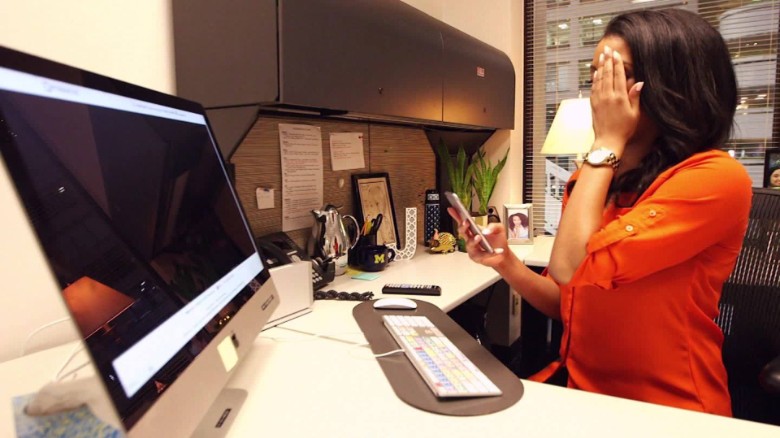 (Chuck Muth) – Longtime readers know how my stories and political adventures sometime take interesting, and even bizarre, twists and turns.  Yep, this is one of those stories.  So grab a cup of coffee or a beer, sit down in a nice, comfortable chair, and enjoy…

Well, since this story is about a public policy dispute involving those two eye-care specialists, let’s see if we can clear things up a bit so you can see straight.

SIDENOTE: By the way, although I’m going to talk about Nevada Assembly Bill 129, legislation is popping up in states all around the country, so continue reading no matter where you live.  OK, let’s get started…

An ophthalmologist, I learned from the American Academy of Ophthalmology, is an actual medical doctor who specializes in eye care.  They have college degrees and at least eight years of medical training.   They can diagnose eye diseases (such as glaucoma), perform eye surgery, prescribe medications, and perform vision tests for eye-glasses and contact lenses.

An optometrist is an eye care professional, but NOT a medical doctor.  They are allowed to conduct vision tests and issue “prescriptions” for eye-glasses and contact lenses – but not what most people consider “real” prescriptions for medications and drugs.

In fact, optometrists more closely resemble the tailor at a men’s clothing store.  You hop on his box in front of a mirror and he measures your legs, your arms, your waist, your chest, your neck, etc.  He then provides the measurements to a seamstress, who then manufactures a properly-fitting suit.

An optometrist does something similar for eye-wear…

And for that privilege, don’t be surprised if you shell out around $150 from your pocket.  But it’s actually a lot worse than that….

You see, if you go to real doctor for the flu or something, he’ll run some tests and check you out and issue you a prescription for whatever medication is determined necessary to deal with your problem.

But you can’t have that prescription filled right there in the doctor’s office. That would be an ethical conflict of interest.  So you have to take the prescription to a local pharmacy or order the medication online.

Not so with the optometrists.

Unlike medical doctors, once the optometrist finishes your vision test and issues you a “prescription” for your eye-glasses or contact lenses, guess what?  Conveniently you can buy your eyewear right then and there in their own private sales office.

Talk about a captive audience!

Because of this highly questionable practice, optometrists have been making a killing off retail sales of eye-wear for years.  Which is why they’ve been pushing for legislation on Capitol Hill in Washington to hamstring the ability of consumers to purchase their eye-wear at big discounters such as Costco and money-saving online retailers.

Fortunately, their efforts to restrict the market and protect their cash-cow have faltered in DC.  Which is why they’re moving their efforts to the states.  Which brings us back to AB129, sponsored by freshman, Nevada Assemblywoman Jill Tolles.

Who, embarrassingly, happens to be a Republican.

You would think a Republican should know better than to introduce legislation that interferes with the free market.  But, well, campaign donations can do strange things to some politicians.  More on that in a minute…

Back to the vision testing – which is how optometrists draw you into their office where they not only vacuum cash out of your pocket to administer the test, but then have the opportunity to hard-sell you on filling your “prescription” for eye-glasses or contact lenses right there in their private little showroom.

And instead of schlepping your way across town and coughing up a hundred bucks or more for the vision test, you can now use your smart phone and a computer to take a highly-accurate vision test online.

At YOUR convenience.  Any time of day.  Seven days a week.  Even on Christmas.

Your test results are then examined by a licensed OPHTHALMOLOGIST – a real eye doctor – in your state who then will issue you a prescription online that you can use to purchase your eye-wear anywhere of your choosing without the pressure of buying from the guy who issues the prescription on his own premises in his own showroom.

Even for the purpose of purchasing refills of an existing contact lens prescription.

It kills the use of tele-medicine.  Even for ophthalmologists who support the use of this technology.

1.)  There are questions you have to answer before being allowed to take these tests online.  If you have certain conditions – such as being pregnant of having high blood pressure – you must have the vision test administered by an optometrist or ophthalmologist.

3.)  These new online vision tests have proved to be every bit as accurate as vision tests administered in person by an optometrist.

4.)  In many countries around the world, you can buy contact lenses and eye-glasses WITHOUT a prescription and WITHOUT an epidemic of eye-related health problems despite the hysteria promoted by the optometrists’ lobby.

5.)  Trying to protect their protected market from changes and innovation is nothing new for this industry.  Years ago they tried to block you from even buying READING GLASSES without a “prescription.”

So all this is is an effort to use political influence and the power of government to block competition.

Which leads to the obvious question:  “Why would rookie Assemblywoman Tolles introduce such an anti-competition/anti-consumer special interest bill?”

Having not just fallen off the turnip truck last night, I immediately went online and checked her campaign finance reports.  And lo and behold, wouldn’t you know it: Not one, but TWO $500 donations to her campaign last fall from the Nevada Optometric PAC! 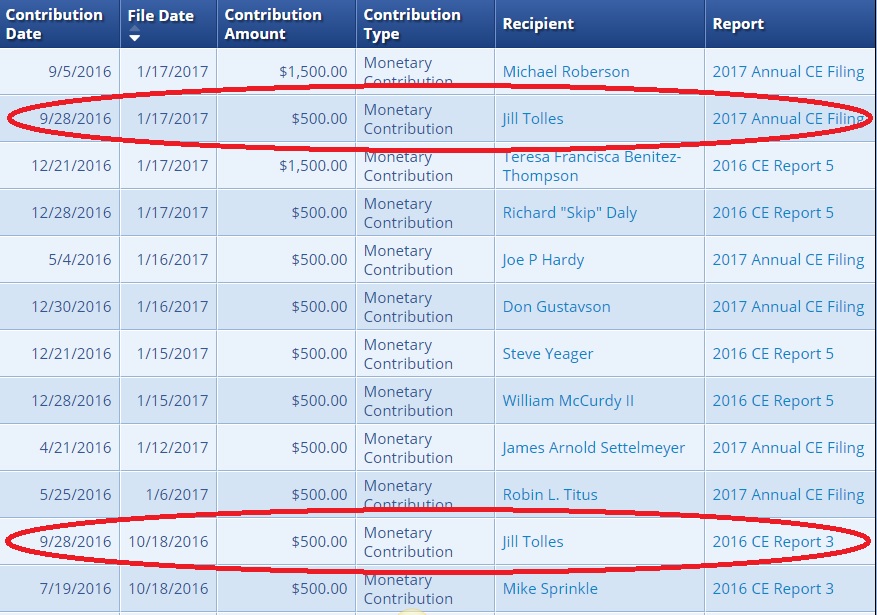 And who knows how much more from private optometrists and other industry-related PACs.

So that cleared THAT up in a hurry…

Still, I didn’t know Ms. Tolles.  And it was possible the optometry lobbyists duped her into believing this legislation was something it’s not – you know, like about patient “health” instead of crony capitalism designed to have government interfere with and restrict the free market.

So trying to give her the benefit of the doubt and knowing I’d be in Carson City this week, I reached out to a mutual friend to arrange a meeting.

After all, it wouldn’t be unusual for a freshman legislator to be misled by a professional influence-peddler.  Happens all the time with a citizen Legislature.  And if so, maybe Ms. Tolles would see the light and withdraw or amend the bill so I wouldn’t have to make her feel the heat.

They don’t call me “Mr. Thoughtful” for nothing.  🙂

The meeting was set for yesterday afternoon at 3:00 pm.

Since I try to operate on “Lombardi Time,” I was there at 2:55 pm.  I entered the outer office, introduced myself to Ms. Tolles’ secretary (they’re called “attaches” in government-speak), Marissa, and let her know I was there for my three o’clock appointment.

It was then that I was informed that I wasn’t on the calendar; that Ms. Tolles already had someone else who was scheduled for three o’clock in her office (behind the closed door behind Marissa’s desk) and would be leaving immediately after that meeting and couldn’t possibly meet with me – even though I’d driven eight hours from Las Vegas and had no way to reschedule.

Talk about getting the bum’s rush!

I left the office and immediately called our mutual friend who set up the meeting to see if a mistake had somehow been made.  I was assured that no, the meeting for Friday, March 17, 2017 at 3:00 pm Pacific Standard Time in Ms. Tolles’ office in Room 4103 was absolutely confirmed.

I smelled a rat.

And as it turns out, the rat’s name was Assemblyman Chris “Let’s Make a Deal” Edwards.  Get this…

At a cocktail reception a couple hours later, I learned that Ms. Tolles had mentioned to a group of colleagues on Thursday that she had a meeting scheduled with me Friday afternoon.  At which point the weasel Edwards reportedly piped up and told Ms. Tolles that under no circumstance should she meet with me.

NOW it all made sense. Sort of…

I mean, if Ms. Tolles was going to take Mr. Edwards’ advice and was afraid to talk to me, why not call, text or email and just cancel the appointment instead of waiting until I got there, locking herself behind a closed door and hiding out while having her poor secretary lie through her teeth about not having the appointment on the schedule?

So in addition to knowing AB129 is a crap sandwich on a pair of bagel buns, we now also know the sponsor of the bill isn’t exactly a paragon of virtue or integrity…or even just a simple dupe.

Indeed, Assemblywoman Tolles is carrying water for a monied special interest that donated big to her campaign and wants the government to protect its market share regardless of technological advances and despite the fact that it’s not in the best interests of Tolles’ constituents or consumers throughout Nevada.

Especially folks needing eye-glasses or contact lenses in rural Nevada where it can take upwards to three days via horse-drawn carriage to get to an optometrist’s office/sales showroom!

And she’s doing so in an intellectually dishonest way by falsely claiming her protection racket bill is about patient “health.”

This is simply bad, anti-consumer legislation regardless of whether you’re a Republican or a Democrat.  This is not a partisan issue.

Indeed, legislators from both sides of the aisle – who now can see clearly what this bill is really all about – should tell the optometrists to learn how to compete in this new, open market…or perish.

The way so many travel agents did once booking hotels and airfare became cheap and easy to do online many years ago.

Or how less-expensive and easy it is today to call Uber from your smart-phone instead of a cab.

The government simply has no business sticking its nose in the business of business like this.  And it’s a shame Ms. Tolles is misleading her colleagues into thinking it does.

As for Assemblyman Edwards, once a weasel, always a weasel.

And his advice in this matter to Ms. Tolles sure as heck didn’t do his colleague any favors.  This whole mess could possibly have been discussed and worked on privately yesterday afternoon instead of airing it out in public today.