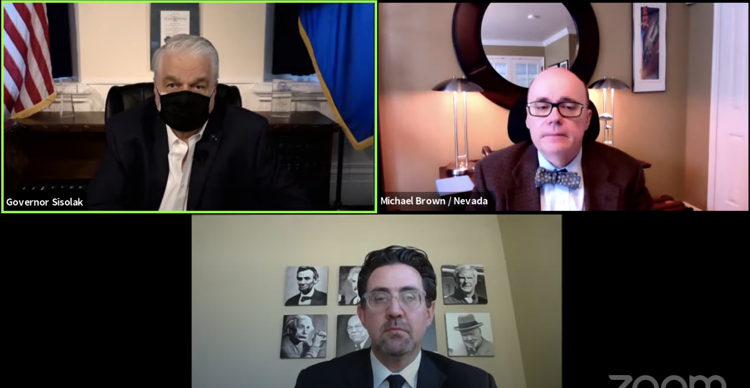 (Robert Davis) – Nevada Gov. Steve Sisolak unveiled a legislative proposal Friday that would allow tech companies to create their own government entities within the state.

“We want to grow our economy beyond casinos and gaming,” Sisolak said. “Great strides have been made in recent years, but too many Nevadans still find themselves vulnerable during economic downturns.”

Known as “innovation zones,” the governor’s office described the proposal as an “opportunity for companies who commit to a significant investment into Nevada the ability to develop new industries in the state centered around groundbreaking technologies.” The zones would be accessible by industries such as renewable energy, blockchain, robotics, artificial intelligence, and wireless technology.

The legislative proposal, which has not been introduced in the Nevada Legislature yet, would allow companies that own 50,000 acres or more of land and make an immediate  $250 million investment to create their own school districts and perform other municipal services. Companies would also have to invest $1 billion in the area within a decade to levy taxes.

The legislation would benefit companies like Blockchains, LLC, a cryptocurrency firm in Sparks, Nev., which the governor said during his State of the State address has already committed to creating a “smart city” on 67,000 acres it purchased in 2018, the Las Vegas Review-Journal reported.

For economic analysts like John Mozena, president of The Center for Economic Accountability, a free-market think tank, innovation zones represent solutions that will only benefit big, well-connected businesses.

“There’s real value in the idea of freeing Nevadans to be innovative and creative in the way they structure themselves and do business, but why limit that capability only to companies that can afford to purchase 50,000 acres of land?” Mozena told The Center Square.

“Why not solve those problems for every business in the state, from one-person startup all the way up to household names like Google, Tesla or Amazon?” he continued.

Under the proposal, the Governor’s Office of Economic Development (GOED) is responsible for administering the program. GOED Executive Director Michael Brown, who joined Sisolak for the announcement, estimates the legislation will create nearly $16.4 billion in total economic output and provide up to 120,000 new jobs within the state.

Brown said that Nevada’s Pacific Time Zone, proximity to Silicon Valley, and political climate make it a great place to implement the zones.

“The next normal will be different. It will not mean returning to the 2019 economy. We are now at a period of great acceleration,” he said.

During a meeting with local lawmakers at the Nevada Economic Forum in early February, Sisolak lamented that it could be years before state tax revenue rebounds to pre-pandemic levels. To that end, innovation zones represent a viable solution to inject some life into Nevada’s economy, he said.

Sisolak said Friday the innovation zones will be done without tax abatements or financial incentives. Instead, Nevada will collect a zone-specific tax that has yet to be defined. Companies would also be required to form a three-member board that has the same powers as county commissioners.

But Mozena argues the proposal is a symptom of a larger problem Sisolak is not addressing: Nevada struggles to attract next-generation businesses even though companies like Tesla and Apple make use of Silver State land.

“If Nevada’s current tax and regulatory climate is such that it can’t attract the next generation of businesses without bribing them or making special exceptions, then the solution should be solving those problems for everyone, rather than giving a few big companies the chance to set up their own company towns out of the reach of policies that everyone else has to suffer under,” Mozena said.