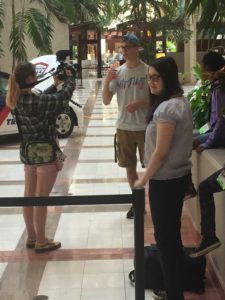 As I mentioned a couple weeks ago, my two daughters – Kristen (18) and Jenna (16) – went to this year’s GKIC Marketing Superconference in Orlando with me and participated in the organization’s 3-day “Young Entrepreneurs” program.

The big project they worked on was producing an infomercial for a non-descript product they were assigned.

Jenna’s team won the competition for “Best Demonstration” and Kristen’s team won “Best Overall.”  Jenna was featured in hers (blue checkered shirt) and Kristen was the videographer in hers.

Now, I’m pretty much a techno-troglodyte so it took me some time to obtain the videos and figure out how to upload them onto YouTube.  But they’re finally posted!

Not quite a “Bass Pocket Fisherman,” but pretty good for a bunch of “kids.”

On a somewhat related marketing note…

An expensive, half-page ad ran in Sunday’s Las Vegas Review-Journal headlined, “An Open Letter to Southern Nevada: The Next Chapter.”

I can’t believe a copywriter was actually paid to come up with that one.  So bad on so many levels.  Just try to guess what it was about or who it was for – or why anyone should even bother reading the ad to find out.

Advertising malpractice.  Maybe they should hire some “kids”!

On Saturday the JV comms squad sent out an email from “RACE ALERT” – as if anyone scanning their inbox would know that “RACE ALERT” meant Herr Heller, as opposed to the gazillion other campaigns out there.

Then there was this subject line:  “[not fundraising ask]”

Typos are one thing.  This is public school illiteracy.

The short email itself – having something to do with Joe Biden – ended with this message inside a click-on box:  “CHIP IN $3 TO FIGHT BACK.”

Wait.  I thought this was “[not fundraising ask]”?

This is what $4 million buys a campaign these days?  How embarrassing.

Nevadans ought to just start getting used to the name SENATOR Jacky Rosennow and avoid the Christmas rush.

Here’s a list of Nevada Republicans for the 1st, 2nd and 3rd Congressional Districts who have NOT yet signed (CD4 was already covered earlier this week).  Let ‘em hear from you!

* Arizona Sen. John McCain has asked that President Donald Trump not attend the senator’s funeral service when the time comes.  Somehow I don’t think that’ll be a problem.

“On the campaign trail, Senate Majority Leader Mitch McConnell is becoming the GOP’s version of Nancy Pelosi: He remains a powerful force, but no one wants to stand too close to him.  The latest evidence of McConnell’s toxicity among Republican voters came in a West Virginia Senate debate this week. All three Republican candidates were asked to raise their hands if they supported McConnell for majority leader. None did.” – CNN’s Eric Bradner