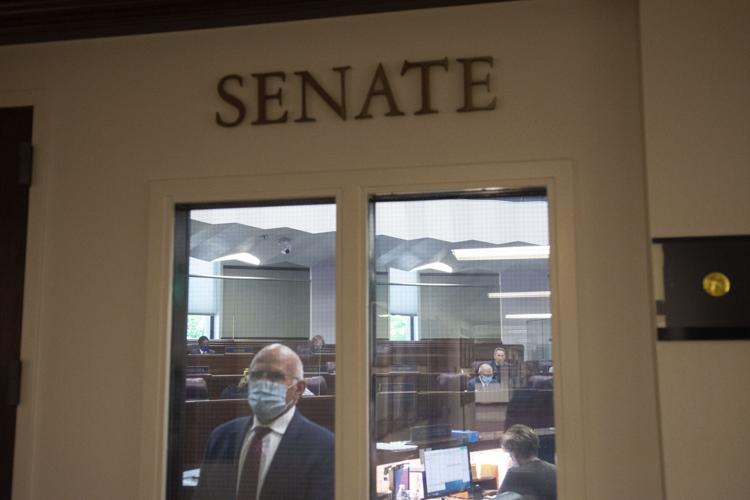 The Nevada State Senate chambers are seen on the first day of the 31st Special Session of the Nevada Legislature in Carson City, Nev., on Wednesday, July 8, 2020.
David Calvert/The Nevada Independent via AP, Pool

(Robert Davis) — A Nevada Senate committee debated a bill on Monday that would modify the state’s requirements for paid sick leave.

The bill is sponsored by the Assembly Committee on Commerce and Labor and Assemblywoman Shannon Bilbray-Axelrod, D-Las Vegas, marking the third time she’s sponsored the legislation.

“I think this last year has shown us how important the role of caregivers are, and how important they are when our world has been turned upside down,” she told the Senate Commerce and Labor Committee on Monday.

The committee took no action on the bill.

According to a report by AARP’s Public Policy Institute, approximately 41 million unpaid caregivers “donated” over 34 billion hours of care to senior adults in 2017. The report estimates the value of these economic contributions to be $470 billion.

In Nevada alone, there are over 500,000 unpaid caregivers, the report found, with a quarter of them being people ages 20 to 24 years old who are caring for their family members.

Approximately 60% of the caregivers surveyed were juggling care and paid work, according to the report. Bilbray-Axelrod said the bill was designed to address this issue.

“One of the things people have said to me in regards to this bill is that they sometimes find themselves in situations where they have to lie to their employer in order to get time off to care for a loved one,” she said.

In 2019, the legislature passed Senate Bill 312, which requires all private employers to provide 0.019 hours of sick time for each hour an employee works.

Bilbray-Axelrod said the last update didn’t clearly set the expectation between employees and employers concerning how an employee’s sick time can be used. AB-190 would clarify that, she said.

“In turn, I think we will see a more productive workforce because employees will no longer feel they have to sneak behind their employers back to take time off to care for their loved ones or family members,” Bilbray-Axelrod said.