Surrender Monkey Republicans Did What They Do Best on ESAs 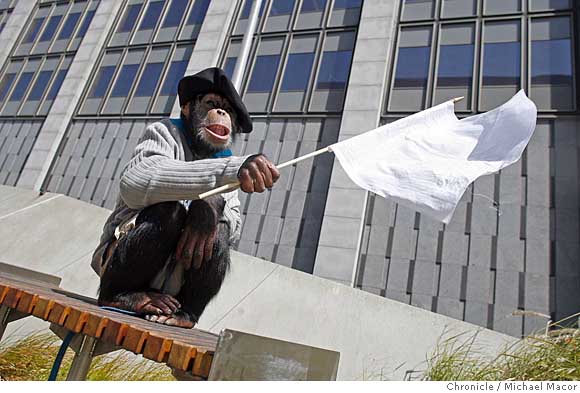 (Chuck Muth) – “We’ve heard from thousands of Nevada families about how crucial it is that we give them freedom of choice in the education of their children,” Nevada Gov. Brian Sandoval declared last January in his State of the State speech regarding funding for the Nevada’s landmark Education Savings Accounts (ESA).

And throughout the 2017 legislative session Sandoval insisted he was “100 percent” committed to the historic new school choice program, even though the funding he requested was less than half of what was needed to provide ESAs to the more than 8,000 Nevada families that had already signed up for them.

But when push came to shove, Sandoval’s promises were as empty as his promises not to raise taxes.  Democrats pushed through a budget without ESAs and Sandoval signed it, cementing his legacy as a “surrender monkey” on the most innovative school choice program in the nation.

Since the Capital Improvements budget bill (SB546) included a tax hike – meaning a 2/3 super-majority vote was needed to pass it – Democrats needed two Republicans in the Senate and one in the Assembly to pass a budget without ESAs; votes that shouldn’t have been there.

Indeed, after Sandoval’s January speech, EVERY Republican in the Nevada State Senate declared, unequivocally, “No ESAs, No Budget.”

“For me (ESAs are) a consumer protection issue,” Sen. Becky Harris said in an interview.  “People changed their behavior based on a promise from the state of Nevada.”

“I’m supportive of ESAs and the commitment the governor made to funding them, and so I expect that the funding will be in the ultimate budget,” Sen. Heidi Gansert promised.

“I want to be clear that when I say (No ESA, No Budget) I mean ESAs as they were passed by the Legislature last session,” Sen. Ben Kieckhefer added.

Yet on Day 119 of the 120-day session, all three of those Republicans broke their word and voted for a budget without ESAs.  Their word meant NOTHING.

Republicans in the Assembly similarly declared “No ESAs, No Budget” at the beginning of the session, and reaffirmed that commitment just four weeks before the end of the session.

“Nevada Assembly Minority Leader Paul Anderson said he and his caucus will vote against the state budget if it does not include funding for education savings accounts,” the Las Vegas Review-Journal reported on May 2.  “Anderson, R-Las Vegas, said he is confident the governor ‘has our back’ and will use either the threat or execution of a veto to fund ESAs.”

Instead, the governor STABBED them in the back.  In response, Anderson and six other cut-and-run Republicans – Al Kramer, Jill Tolles, John Hambrick, Chris Edwards, Missy Woodbury and Keith Pickard – broke their word, surrendered and voted with the Democrats to kill ESAs.