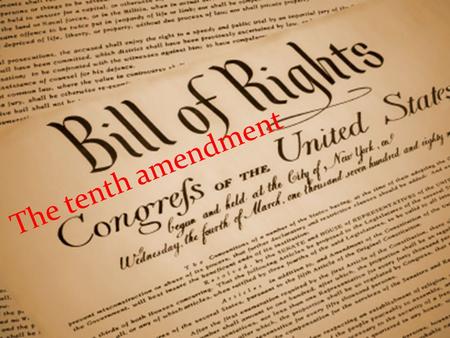 (Chuck Muth) – With a Republican-sponsored bill (HR 1215) titled “Protecting Access to Care Act of 2017” you’d think we were talking about repealing and replacing ObamaCare, right?  Wrong.

As is the case with so many deceptively-named bills sponsored by both parties – as well as socialist Sen. Bernie Sanders – this bill isn’t about health care reform.  It’s about tort reform – “tort” being the technical term for what you and I call “lawsuits.”

The official description of HR 1215 states…

“This bill establishes provisions governing health care lawsuits where coverage for the care was provided or subsidized by the federal government, including through a subsidy or tax benefit.”

Now don’t get me wrong.  Tort reform is a good idea.  Indeed, conservatives have been supportive of efforts to reign in medical lawsuit abuse for years.  But there’s a “right” way and a wrong way to address this issue.  And the right way in this case is the constitutional way.  Specifically, the 10th Amendment way…

“The powers not delegated to the United States by the Constitution, nor prohibited by it to the States, are reserved to the States respectively, or to the people.”

Fortunately, the Founders didn’t leave the enumerated powers delegated to the federal government to our imagination.  Article 1, Section 8 of the U.S. Constitution lays those powers out for us, including the power to collect taxes, borrow money, regulate interstate commerce, establish rules for immigration, to coin money and establish post offices.

The power to establish a universal, federal law dictating how much money can be paid out on a medical malpractice lawsuit doesn’t seem to be in there.  And in fact, 30 states already have their own individual laws governing such lawsuits.  So where and how does this become a federal matter?

Fortunately, Republicans in Congress years ago established a rule that requires all bills to state “as specifically as practicable the power or powers granted to Congress in the Constitution to enact the bill.”

As such, the bill’s sponsor, Rep. Steve King of Iowa, maintains in his “Constitutional Authority Statement” that Article 1, Section 8 “grants Congress the power to provide for uniform laws that remove barriers to trade and facilitate commerce nationwide.”

Talk about a thin reed!

Reporter at the Constitutional Convention: “Mr. Madison, could you give us some examples of what you mean by interstate commerce in the Commerce Clause?”

To borrow a popular phrase, “Come on, man!”

Politicians have been grossly expanding the definition of the Commerce Clause for decades in efforts to impose greater federal control over more and more aspects of the daily lives of ordinary American citizens.  It’s a dangerous threat identified by President Ronald Reagan in a 1980 speech…

“I believe in people doing as much as they can for themselves at the community level and at the private level, and I believe we’ve distorted the balance of our government today by giving powers that were never intended in the Constitution to that federal establishment.”

The power to regulate malpractice lawsuits through Congress was simply never intended by the Founders who wrote the Constitution.  Those men fully understood the dangers of giving the federal government too much power and went out of their way to limit it.

Of course, as we all know, it’s possible to rationalize just about anything – and Rep. King is attempting to do just that with HR 1215.

But as Hans von Spakovsky of the conservative Heritage Foundation points out, “Doctors are licensed by the states, and state legislatures and state medical authorities have the authority to promulgate the standards of medical care in their states.”

Tort reform is a good idea.  Federalizing it is not.  Congress should reject the misnamed “Protecting Access to Care Act of 2017.”