(Chuck Muth) – I won’t rehash everything I’ve covered have so far.  Click on these links to read Part I, Part II and Part III. When we left off, Justin Jones – a candidate for Clark County Commission and lawyer for the “Save Red Rock” agitators – had threatened to make things “uncomfortable” for then-County Commissioner and gubernatorial candidate Steve Sisolak if he didn’t issue a public statement opposing a waiver request on Jim Rhodes’ proposed Gypsum housing project. Sisolak did as he was told.  He certainly didn’t want to be “uncomfortable.”  And after issuing his public hostage-like statement, the Red Rockers & Rhodes Blockers dropped their lawsuit, the Clark County Commission proceeded to vote down Rhodes’ waiver request, and both Sisolak and Jones went on to win their respective elections. This was all done behind the scenes without the voting public knowing what was going on.  However, thanks to Rhodes’ current lawsuit, the whole stinkin’ mess has finally come to light.  Now here’s the rest of the story… Commissioner Susan Brager – representing the district where the development project is located and described by a former colleague as “the biggest flip-flopper I’ve ever seen” – was termed out.  Jones was running for her seat.  And his fear was that she’d bring up the waiver request after the November election during the “lame duck” period before the new commissioners were sworn in. And it was further feared that with Brager’s – and possibly Sisolak’s – support, the waiver might be approved before Jones could take the seat and scuttle the Gypsum deal. That’s why it was so important to the Red Rockers that Sisolak come out against the waiver; hoping his public opposition would derail any such vote. In fact, in a March 2018 email Jones worried that if Sisolak lost his primary race to Chris G, that he might “try to get something through right after the election in the lame duck time before I (hopefully) take the seat in January 2019.” But Sisolak did win the primary.  And not only did he announce his opposition, he went further and called for the waiver vote – which had been scheduled by Brager for December 5, 2018 – to be delayed until after Jones was sworn in. In a deposition, as reported by Daniel Rothberg of the Nevada Independent, Brager said she was “blindsided” by Sisolak’s actions and agreed that he “had gone the other way” against her.  In the end, the December 5th vote on the waiver was yanked. On the morning of the day before the scheduled vote, Heather Fisher, grand imperial pooh-bah of the Red Rockers & Rhodes Blockers, texted Sisolak…      “I wanted to quickly write to thank you personally! Susan Brager just called and told me that the Red Rock development items will be pulled from tomorrow’s agenda and I know that you were working with her on that.  We really appreciate your support.” To which Sisolak replied…      “Congratulations. I have spent countless hours trying to get Susan to this point. Glad it has worked out.” No wonder one of Rhodes’ attorneys referred to this stinkpot as an “illicit deal” and “corrupt political agreement.” But hang on.  The muck is about to get even deeper. Jones took office in January 2019… 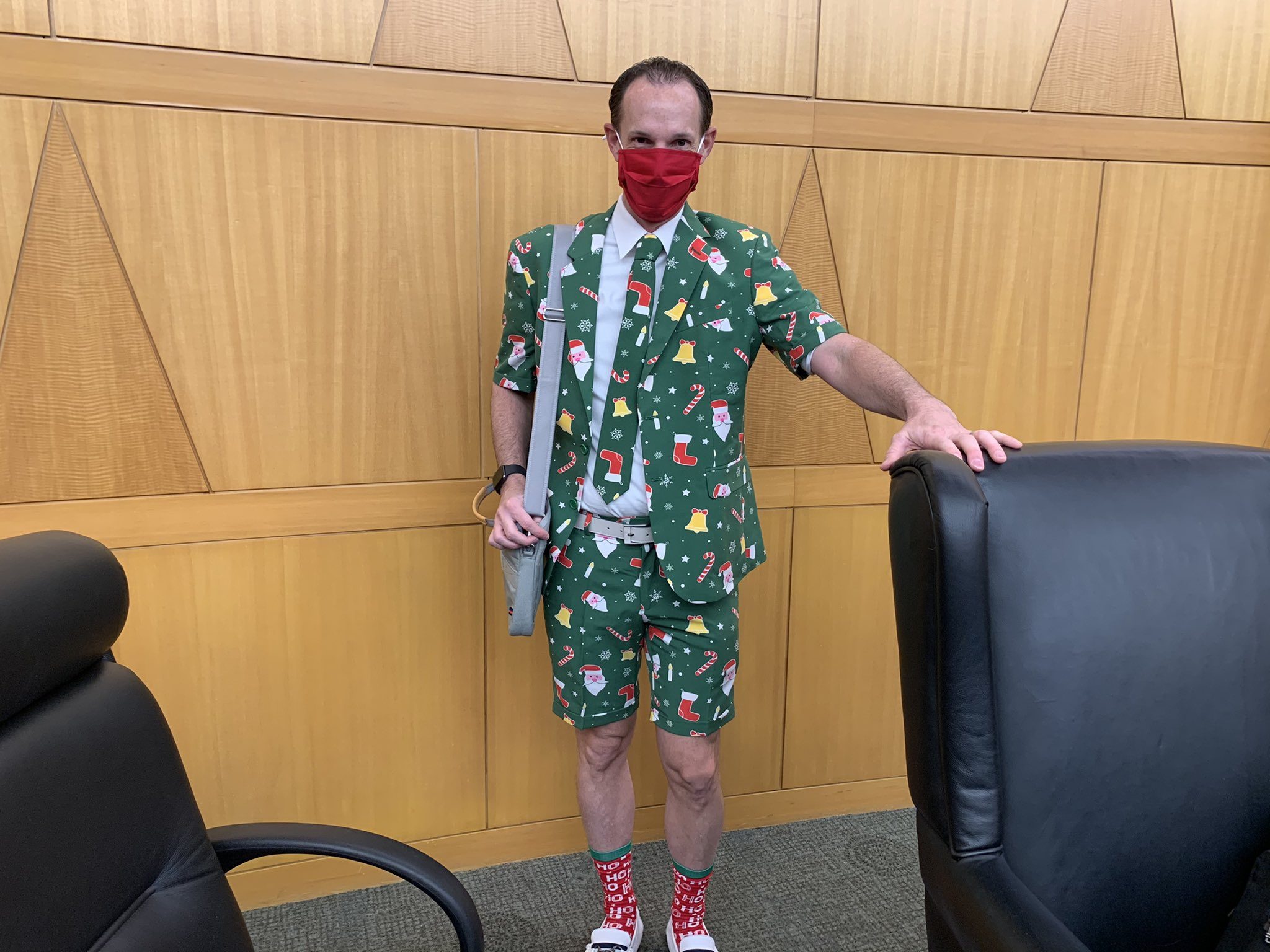 Yes, by all means, let’s take this guy seriously

The waiver vote was delayed until April.  And Jones continued his efforts to kill the Gypsum project despite his obvious conflict of interest.  “Despite his prior advocacy,” Rothberg reports, “Jones did not recuse himself in a vote on the waivers; he had received an opinion form the state ethics board clearing him to weigh in.” But Rhodes’ legal team describes that ethics decision as a “sham opinion,” maintaining it was “predicated on a wholesale misrepresentation of Jones’ activities” which hid the full scope of his involvement with the Red Rockers & Rhodes Blockers. Ultimately, however, the Commission unanimously denied the waiver.  Which led to the project filing for bankruptcy in July.  Which led to Rhodes filing another lawsuit, alleging the county failed to abide by the 2010 agreement to deal with his project in “good faith.” “They didn’t deny it because of water,” said Todd Bice, one of Rhodes’ lawyers.  “They didn’t deny it because of traffic.  They denied it because of a backroom deal and then got rid of the evidence to try to cover up that backroom deal.” What?  Got rid of the evidence?  Why, whatever do you mean? Rothberg explains…      “As Gypsum collected evidence for the case, it received several communications involving Jones from other witnesses, communications that Jones had not turned over. As part of the discovery process in the case, Gypsum sought documents from Jones, associated law firms and his wife, Megan Jones, a Democratic consultant who has served on the Nevada Conservation League board.      “A bankruptcy judge last year allowed for the forensic investigation of Jones’ cell phone.  What Gypsum found was significant. According to a filing, on the evening of the April 2019 vote, ‘all of Jones’ text messages magically disappeared from his phone.’ Gypsum said Clark County is also culpable in not taking steps to preserve the records, and it should also be sanctioned.” Magically disappeared?  It’s a miracle! No, it stinks on ice.  One can only imagine what was on those scrubbed text messages. Jones shouldn’t be saving red rocks.  He should be sentenced to breaking them at the gypsum mine in a pin-striped prison suit for 5-7 years.  And while that’s clearly unlikely, at least voters will get a chance to fix their mistake by voting this unethical goober out of office this November. We now return you to our regularly scheduled programming while I return to my sabbatical. EPILOGUE A number of folks have written asking how Jones got to where he is today…other than his obvious lack of ethics.  Well, in an email to a constituent in 2021, the Red Rocker explained how he owes it all to…Harry Reid.      “I have known the Reid family since I was an 18 year old college student, serving with Josh (Reid) as Chair and Vice Chair of College Democrats at BYU. Senator Reid gave my wife an internship in DC when she and I were just married, and then hired her right out of college while I was in law school.      “My wife has worked with or for Senator Reid for much of her career, including his last 3 campaigns. Senator Reid was instrumental in my getting a prestigious federal judicial clerkship and aiding my career and interest in public office. Rory (Reid) threw me my first fundraiser when I was a green 27 year old running unsuccessfully for State Assembly.      “Needless to say, my family owes a lot to Senator Reid.” Now it all makes sense. 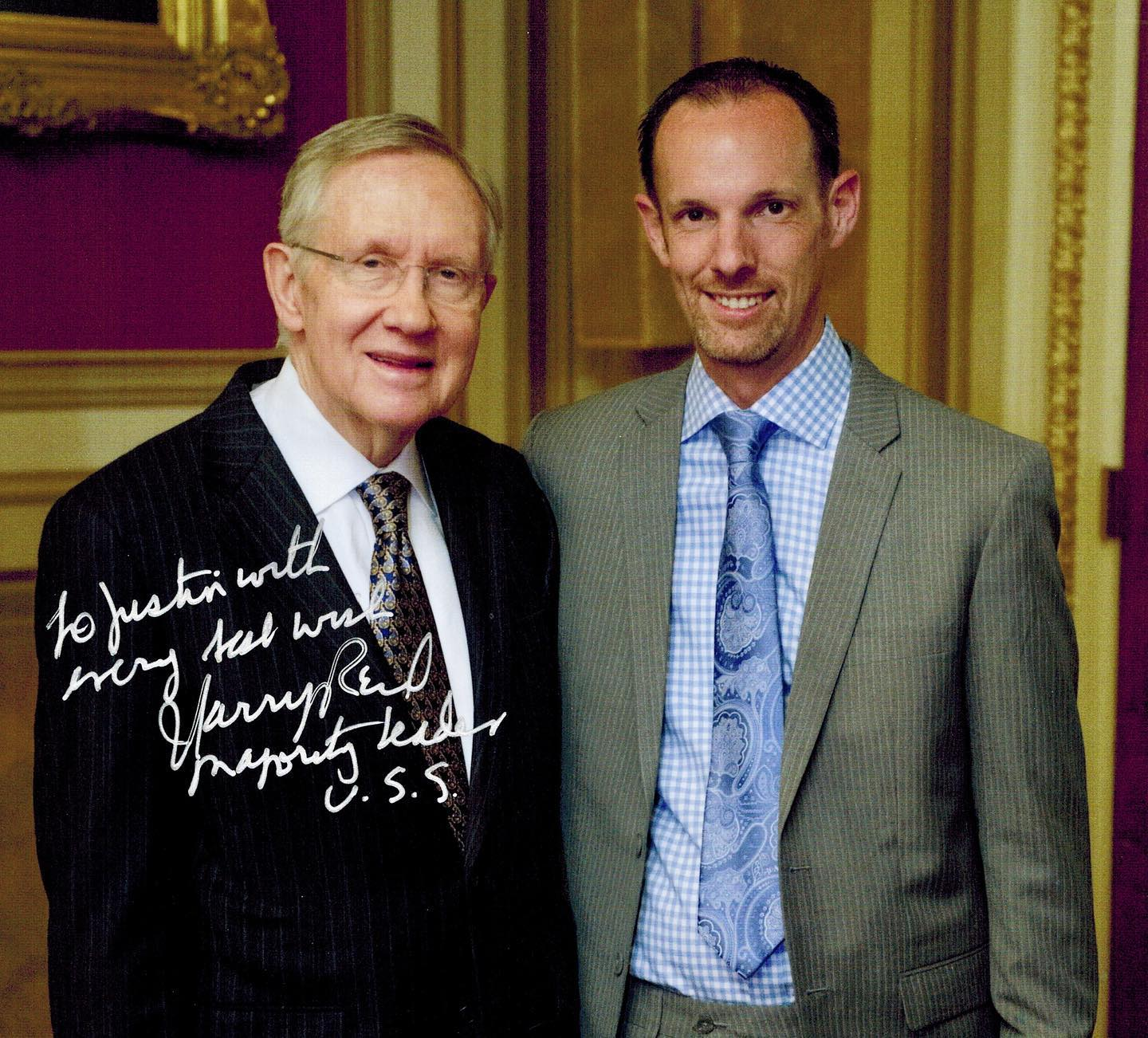 FAMOUS LAST WORDS “Mr. (Justin) Jones is hopelessly conflicted here and should recuse himself from any debate or vote on the issue.  If he takes the less ethical course, Gypsum Resources has a very good chance of once again prevailing in court.” – Las Vegas Review-Journal editorial, 11/10/18