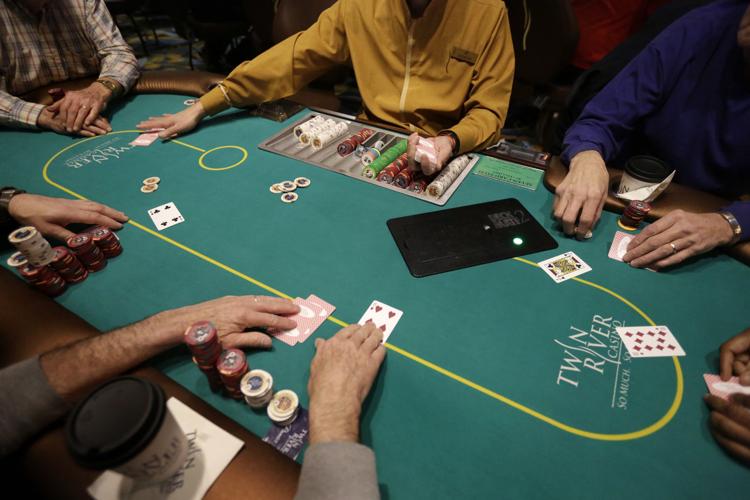 In this 2016 file photo, a card dealer deals a game of poker to patrons at Twin River Casino, in Lincoln, R.I. Steven Senne / AP

(Noell Evans) – The Nevada Gaming Control Board wants to strengthen discrimination and harassment regulations within the industry.

The board voted unanimously this week to recommend the changes to the Gaming Commission.

The issue of discrimination and harassment in the gaming industry has been under scrutiny in the past year as Steve Wynn, the head of Wynn Resorts, was fined $20 million and faces potential banishment from the industry over sexual misconduct allegations.

The changes recommended by the Nevada Gaming Control Board would require the implementation of a policy “prohibiting workplace discrimination or harassment of a person based on the person’s race, color, religion, sex, sexual orientation, gender identity or expression, age, disability, or national origin, including, without limitation, sexual harassment.” This policy would be required by companies with 15 or more employees.

In 2018, following the initial public allegations against Wynn, the commission considered similar changes to the ones now being discussed but they weren’t implemented.

“This is well overdue,” Gaming Control Board Chairwoman Sandra Douglass Morgan said, according to YOGONET Gaming News. “We will continue to lead the way and ensure that it’s clear in our regulations that we hold gaming licensees to the high standards outlined in our state’s public policy concerning gaming and that its continued growth and success is dependent on public confidence and trust.”

The Nevada Gaming Control Board is scheduled to take up the issue at its Nov. 21 meeting.

The Center SquareJune 18, 2022
Read More
Scroll for more
Tap
Trump is giving Nevada workers an early holiday bonus
The Trouble with Judges and Judging Them: Part I