One of the biggest politically correct jerks in Congress today has to be Democrat Rep. Jared Huffman of California.  Get this…

Huffman is throwing a hissy fit because Republicans in the House refused to give him a vote this week on two asinine, anti-free speech amendments on a bill…

1.)  To ban the sale of Confederate flag merchandise in National Parks

2.)  To ban any grave in a federal cemetery from being decorated with a Confederate flag

In George Orwell’s classic book, “1984” – written in 1949 – he describes a fictional government under the rule of Big Brother…

“The Ministry of Truth is involved with news media, entertainment, the fine arts and educational books. Its purpose is to rewrite history to change the facts to fit Party doctrine for propaganda effect.”

In the immortal words of Carnac the Magnificent, “May a sick yak leave a gift in his sock drawer.”

P.S.  Just a little heads up on a name change.

Only the name of the e-newsletter is being changed.  The great conservative content and new format I switched over to a couple months back will remain the same.  Cheers!

Santa Claus brought the Muth kids a new puppy, a Lab/Rottweiler mix, for Christmas in 2009.  The kids named “Prancer” after one of the reindeer who brought her to us.  And Prancer has been my daughter Jenna’s favorite dog, among four, ever since.

A few weeks ago Prancer started limping.  The vet said it might just be a sprain and not to let her hop up on the sofa, bed or use the stairs.

So since Prancer’s nighttime sleeping spot has always been in bed with Jenna upstairs, Jenna set up an air mattress downstairs in the living room so she and Prancer wouldn’t have to sleep alone at night while her leg healed.

Alas, the leg wasn’t getting any better and a follow-up visit to the vet yesterday came with crushing news that Prancer has bone cancer in the leg.  We don’t know yet if it’s treatable or not, but you can well imagine the concern on Jenna’s little 14-year-old mind these days.

Anyone’s who’s been through such a heart-wrenching experience knows exactly what she’s going through right now, so any emails of support to buck her up and give her a little more strength in this difficult period would be greatly appreciated: jennamuth01@gmail.com

Here’s a picture of my baby with her baby… 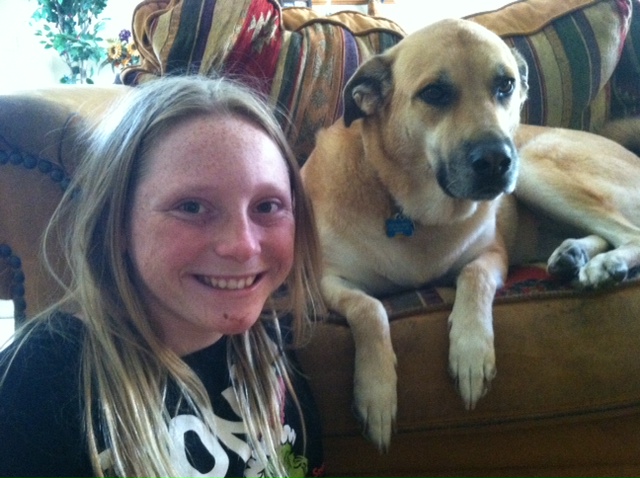 “Instead of bringing people together, #Obama has been endlessly divisive, made race relations in America worse.” – Newt Gingrich